It started with a race

September 5, 2019 / By Shannon Hodson / .(JavaScript must be enabled to view this email address)

When runner Ashley Fuller learned that a popular local road race, the Michael J. Cerroni Memorial 5K, in Black River, NY was ceasing after 2017 because the initial fundraising goal was achieved, she had to do something about it.

The race was named after Michael Ceronni who passed away in a snow-mobile race in 2006. Michael was a father of two and a marine who served three tours in Iraq. 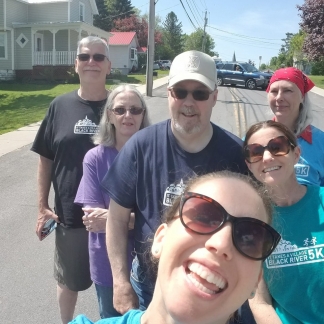 He loved to run so is family organized a 5K in his hometown of Black River. The funds raised from the race were used to fund scholarships for two Carthage High seniors each year.

Ashley Fuller ran the race each year and she missed it greatly when it didn’t take place in 2018.

Ashley said, “Two thousand eighteen was the first year without a 5K in Black River and my best friend and running partner Jenn Ambrose and I joked that we should start it again...well, we ran many miles and had many conversations, but we needed help.”

Ashley and her husband Geoffrey were members of Black River UMC in the Northern Flow District; they were stationed at nearby Fort Drum, where Geoffrey was a Chaplain for the Army. Ashley approached Black River UMC Pastor Bob McCarthy with this idea in February of 2019.

Ashley said, “While Black River UMC may be small in numbers, it is full of ambition and heart to reach out to the community. One mention and the church was in.”

Together Ashley and Pastor McCarthy thought of a cause that the race could support—the Good Neighbors Network, an outreach initiative started by Black River UMC.

With the cause in mind for the road race, Ashley then had a light bulb moment about how the race could be a platform for youth mission work. When her husband was stationed in Virginia, Geoffrey was the youth minister and Ashley was also very active with the youth at their church, First Baptist in Hopewell, VA. The youth had already come up in 2018 to volunteer and she wondered if in 2019, they could come back and help put on the race.

The race became renamed, the It Takes a Village 5K and the inaugural race took place on August 4, 2019. Nearly 100 runners participated, and the 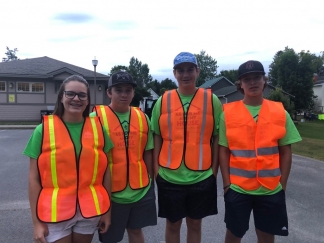 The youth set up the race course, directed the runners during the race, and helped with clean up. Pastor McCarthy said, “I had no idea how much work was needed to put on a race; the youth were tremendously helpful.”

Throughout the week, the youth had fellowship in the morning where they worked on spiritual development; they completed various community projects during the day, and they worshipped at night.

The youth’s motto became “How may I help you?” They mowed several lawns, weeded flower gardens, attended to community gardens, and rebuilt the church’s retaining wall. One woman responded that she needed her house power-washed but wanted to wait until she got her shutters painted. The youth took it upon themselves to take down the shutters, paint them, power-wash the house, and reinstall the shutters.

The youth that volunteered greatly impressed the community. Pastor McCarthy said, “They were impacting lives of so many people they didn’t even know.”

Lee Carpenter, a Black River resident that owns a landscaping company was so in awe of the youth he saw working around the town that he gave them a $100 gift card for Stewarts to treat themselves to ice cream.

Rev. Weeden said, “The hospitality of the youth was off the charts. They were so kind and generous. Also, they were so highly engaged. They truly lived out their motto, ‘How can I help you?’ not just with the community, but with each other.”

Rev. Weeden referred to one youth from Hopewell First Baptist Church who was barely involved in the youth group in 2018 and the experience volunteering with Black River last year impacted him so much that he accepted Christ when he returned home and became the lead guitar player for worship each night this year.

One church member’s vision to keep a 5K race alive resulted in Black River UMC’s expansion of community partnerships and positively impacted the lives of youth volunteers and the neighbors they helped.

Rev. Weeden said, “Community partnerships are huge. They help build relationships and people begin viewing the church as a light in the world.”