Editor’s Note: This is an excerpt from a longer story that Pastor Jones submitted for the Mohawk District newsletter. To read the original article, contact Mohawk District Administrative Assistant Cindy Muder at MohawkDIstrict@unyumc.org.

This past July I took part in a cross-cultural trip through my seminary, Drew Theological, and spent eight days in southern Arizona in an area commonly referred to as the Borderlands. The purpose of this trip was to better understand the issue of immigration to the U.S. from Mexico and Central America. When I signed up for the class back in January I did so solely because it fit my schedule and it checked a graduation requirement off my list. As the months passed leading up to the trip I saw the issue of immigration becoming more and more divisive in our society and in our churches. I’ve heard stories of people walking out of worship, getting into heated debates and a lot of angry Facebook posts fighting over this issue. I decided to use this trip as an opportunity to learn as much as possible about this issue with the hopes of sharing what I learned with all of you so that we might better understand it and see how it relates to our life in the Church.

We were guided by an organization called Borderlinks that works to educate people on the reality of immigration from Mexico and Central America into the U.S. The first thing I learned was this is not a political issue. Politicians from both parties have implemented legislation that has caused tremendous harm not only to those seeking to enter the country, but also, to the U.S. citizens living in the Borderlands. Seeing this first hand made me look at the issue much differently, I decided to drown out the noise of the 24-hour news cycle and solely look at it through the lens of a Christian.

As I prepared for this trip there was one question weighing on my mind, why do people risk their lives to come to a country where many don’t want them? I learned that while there are some people who cross with bad intentions, this is a small percentage of the total number and these people are the ones with the means to get into the U.S. without getting caught. Most of the people trying to make it to the U.S. are people not only trying to find a better life and these are the ones who are being captured in the desert, but also, dying from heat exhaustion and inhabiting our government and private detention facilities. Of course, there are exceptions, but for the most part this is the reality.

We performed an exercise that really opened my eyes to the economic issues in Mexico. We went to a local Food City Supermarket in the border city of Nogales. We were broken up into groups and told to go price shop for various items. Once we were done pricing what would be a week’s worth of groceries

the bill came to $78.33. In Arizona the average minimum wage worker takes home $8.60 after taxes, which means they would have to work 9.1 hours to buy a week’s worth of groceries. When we looked up the cost of these items in Mexico the total cost came to 1,075.90 pesos ($57.79 U.S.). So, while the cost of the items would be slightly cheaper in Mexico, the wages are much lower. The average take home pay for a Mexican worker is 17 pesos per hour. At this rate a person in Mexico would have to work 63.3 hours just to buy these groceries. This doesn’t include money for housing, utilities, school supplies, clothing, etc.… Just to have enough to eat a worker in Mexico must work 7 times as many hours as an American on minimum wage. This economic disparity is the reason many are crossing the border, they simply can’t afford to live in Mexico with wages being kept low by the wealthy.

With more and more people trying to escape the poverty and corruption in their home countries, the U.S. in the 1990s implemented a policy called Prevention through Deterrence. The government put up walls along the border in the areas that were the easiest to cross, normally near cities and towns. These large walls and the strong presence of Border Patrol agents has caused people to go to more remote areas to try and cross, more specifically the deserts and the mountains. We visited one of these remote areas near the city of Douglass and when you get five miles away from downtown the wall is replaced with easier-to-cross fencing. When I asked why our guide told us that if someone were to cross in this place they had a five-mile walk through the desert to get to the town. This gives Border Patrol more time to catch them and there is also a good chance the people will get injured or even die before they ever reach the town.

To get some idea of the conditions these people are crossing through just to get to this country Borderlinks took us to a remote spot just off the side of the road about 40 miles north of the Mexican border. This spot is where many immigrants are trying to go because once they are here, there is a possibility a friend or family member already in the U.S. who can come and pick them up. We came to this spot and first thing we had to crawl under a barb-wire fence just a few feet from where we parked. Once through the fence, we walked one mile into the desert.

We only walked one mile into the desert, but it felt much longer. Our destination was a memorial to a young woman who was found dead in this desert, her name was Reina. She had died from the heat one mile from the road, so close to her destination after a journey that was most likely thousands of miles. As we stood and prayed at her memorial I struggled to feel the presence of God. The intense heat, the sun beating down with no shade to be found, the stagnant air that didn’t seem to move. The fact that you can’t even sit on the ground because of millions of fire ants; the temptation of water so close deep inside cactuses that could only be cut into with a hatchet, so not attainable otherwise.

When our group sat down to discuss the experience at the end of the day I summed it up in a just a few words, I feel like I saw what Hell is like. I had never been in a place where the presence of God felt so far away, yet I believe God was with Reina as she breathed her last breath on the rocky desert ground.

I share these stories solely to bring some clarity to a messy situation. I don’t want to try and sway 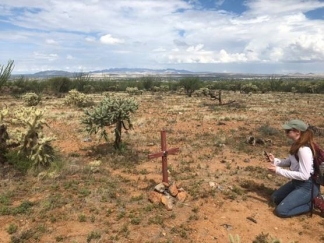 anyone politically, in fact I left Arizona with more questions than answers. I have no clue what the solution is. Regardless where you stand politically as Christians we should all agree that no child of God should have to work 100 hours per week just to barely survive in poverty. No child of God should be so desperate that they are willing to risk their lives walking through thousands of miles of desert just to have a chance at a decent life. I can say from experience of walking through one mile of desert, nobody would put themselves through that unless they felt like they had no other choice.

As we stood at Reina’s grave in the middle of the desert, an intern from Borderlinks named Maddie, wrote a poem at her graveside.

This is sacred ground.

Anointed with the blood of those seeking refuge in a land that does not want them.

Washed in the blood of those who first cared for this land.

This is sacred ground.