February 6, 2017 / By Shannon Hodson / .(JavaScript must be enabled to view this email address)

At 5 p.m. on a Wednesday night, a diverse group of youth, ages 9-14, begin gathering into Sarah Jane Johnson UMC; they are there to play basketball! This is no ordinary basketball league; its purpose is not only to develop the children’s basketball skills, but also to teach the children about God’s love for them.

Before hitting the gymnasium, the children gather into the chapel to learn about God—this is called “team time.” On this particular night, Pastor Ron Wenzinger began the lesson based on Matthew 5: 14-16, “You are the light of the world. A town built on a hill cannot be hidden. Neither do people light a lamp and put it under a bowl. Instead they put it on its stand, and it gives light to everyone in the house.  In the same way, let your light shine before everyone so they see the good in you and you 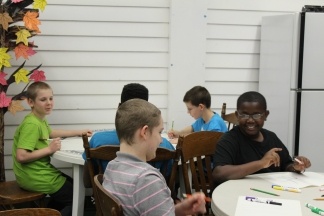 give glory to God.”

The children then drew pictures of their lights, including skills such as drawing, writing, basketball and family-oriented skills like helping their mother cook.

Kelly Crane, the Outreach Director at SJJ and its George F. Johnson Dream Center, completed the lesson. She held up a flashlight with no batteries and asked the children, “Why is this light not shining?” Many mentioned that the flashlight had no batteries. And Kelly said, “Exactly, the light needs a power source. God is your power source. He is what makes your light shine.”

After team time, the kids headed up to the basketball court for practice on a court made from Johnson Endicott shoe soles.

The basketball league at SJJ began almost a decade ago as part of the church’s George. F. Johnson Dream Center. The basketball league consists of four teams that practice at SJJ and the Boulevard UMC in Binghamton. Each church coaches two teams. SJJ holds two two-hour practices each week on Mondays and Wednesdays and Boulevard UMC holds two two-hour practices on Tuesdays and Thursdays. The teams then compete on Saturdays. This year, there are 45 children signed up for the program.

How do the children learn about the basketball league?  Kelly Crane said,  “We have a great relationship with the (Johnson City) Middle School. They refer children to us who do not make the basketball team and kids also learn about the program through word-of-mouth. The George F. Johnson Dream Center is a recognizable and highly regarded. I am helping the community learn that The Dream Center is part of Sarah Jane Johnson.”

George F. Johnson, in fact, is a big name in the history of the Binghamton area. George was a businessman in the early 1900s; he was the founder of the Endicott-Johnson shoe factory. During that era, Endicott-Johnson was the largest manufacturer of footwear in the United States, employing 24,000 workers at its peak. Despite paying some of the highest wages in the industry, Endicott-Johnson was consistently profitable. SJJ is named after George’s mother. Johnson City, where SJJ is located, is also named after him. His Dream Center is the foundation for the young children who learn about God and become fantastic basketball players. The Dream Center also offers tutoring; Kelly is expanding the outreach to adults as well, by such offerings a computer literacy classes.

One unique characteristic about the basketball league is that it is co-ed. Beth Martinez is one of the coaches. When her husband 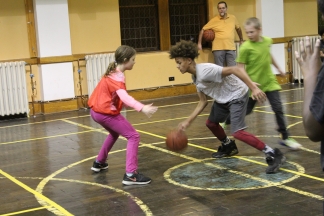 approached her about coaching, she wasn’t interested at first. She said, “I said to him, ‘Why would I want to coach these kids?,’ but then I thought, ‘If these girls can play with these boys, I can certainly coach amongst male coaches.’’ Beth is one of two female coaches now at SJJ. She coaches one team and a husband and wife, Mark and Kris Moyer coaches the other team.

On this particular Wednesday night, he children practice with intense concentration. The one girl at practice this evening, 11-year-old Teagan Morris, held her own, doing an incredible job blocking her opponents’ passes and shots.

Droplets of sweat dripped off 12-year-old Noah Sprately’s face as he explained his history with the SJJ league, “When I first moved here three years ago (from New York City), I was asking my mom how I could join a basketball team and she had a friend who lived upstairs from Beth (Martinez) and she told my mom about this league. I love it! I like playing here because I can see my skills improve. It’s very competitive and hard to make my school team—the bigger kids in this league do a great job at helping me build my skills.”

The basketball program helps bring consistency to Noah’s life as it does for many of the other children involved. Noah’s life in 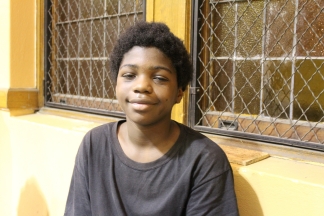 New York City was one of moving around constantly—his mother’s caseworker suggested they move to Binghamton for a quieter and better quality of life. “This basketball league is the thing I am happiest about since I’ve moved here,” Noah said.

While improving their basketball skills, the children are learning how to become “God’s love to their neighbors.” Kelly Crane reminded the kids in the transition between “team time” and practice that, “Team time is just as important as what you do upstairs on the court; we are teaching you how to be kind and compassionate—these are important life skills.”

Through their basketball program, SJJ is reaching children from a diverse, poor neighborhood and helping them to see that they are “the light of the world.”