How Danyal Mohammadzadeh became a passionate disciple of Jesus Christ

December 20, 2016 / By Shannon Hodson / .(JavaScript must be enabled to view this email address)

When Danyal Mohammadzadeh came to the United States in 2011, he was “exhausted, destroyed, and disappointed.” Today, Danyal is joyfully on the path to become a United Methodist elder. This is a story of how one individual invited Danyal to Delmar UMC and how the congregation and leadership of the church transformed Danyal’s life. This is a story of inspiration.

An Iranian citizen, Danyal’s journey to the United States was not a chosen one. A human-rights activist and journalist in Iran, he was constantly arrested for exposing the lack of human rights for women and minorities in his country. Danyal expressed, “Journalism is a crime in the Middle East. They consider journalists potential spies.”

During the heated 2009 Iranian presidential election, the newspaper that Danyal owned was shut down and he was put in solitary confinement where he was tortured for 39 days. Released on bail, he temporarily fled to Turkey.

While in Turkey, The U.S. Embassy, noting that Danyal was on the Amnesty International list, requested to meet with him to discuss his concerns about the lack of human rights in Iran. Danyal met with the U.S. officers. He said, “I spoke with them about my solitary confinement, human rights in Iran, and the fact that we have over 800 political prisoners. They are in prison just because of the way they are thinking. They didn’t use any guns; they just used their pens and wrote their views. It was supposed to be a confidential meeting because I wanted to return to Iran and continue my activities.”

After a month in Turkey, Danyal returned to Iran.

Danyal said, “If Iranians realized I met with U.S. Embassy, they would arrest me again and put me in solitary confinement again. My charge would have been communications with foreign countries; in other w

ords, I’d be considered a spy. I would go to prison for 10 years or could even face execution.”

Danyal immediately fled to Turkey within a couple of days of the Wikileaks exposure and met with the U.S. Embassy again. They urged him to accept a U.S. Asylum offer.  He would not. He said, “I told them I am a political activist and I cannot destroy or leave my background.” They then offered him a student Visa to study at SUNY Albany and he accepted.

Danyal was in deep despair when he arrived in Albany. He said, “I had no family…no friends…and it was VERY cold.”

At SUNY Albany, Danyal majored in journalism and minored in religion, for what would be his second Bachelor’s degree in journalism. While taking a bible study course, Danyal began to feel Jesus’s gentle tug. With tear-filled eyes, he said, “When I took the bible study course, a new window opened in front of my eyes.  I read the bible, the Gospel, and I realized that Jesus is a human rights activist; he’s a journalist; he’s a reformist; and, he’s a good friend. Jesus was my leader; Jesus was my love…and his teachings were the real asylum I was seeking. “

When Danyal learned about John Wesley and Methodism, he became even more intrigued by Christianity, especially Methodism.

It was the winter of 2014 when Danyal was taking the course about John Wesley. In February, The Times Union published an article about Danyal and his wife Maryam (who came from Malaysia in 2013 and married Danyal). The article was entitled “Living in quiet desperation.” The author, Rosemary Armao described the Mohammadzadeh’s desperate situation. At the time, Danyal had been going through surgeries to treat an abscess on his thigh; his wife had recently been arrested for simply passing through Iran on her way back from visiting family in Malaysia; their financial situation made it difficult to get food on the table; they felt as though they’d never be able to return to Iran.

Deeply touched by the article, Pam Skripak, who lived in the Albany area and had done some work in the Middle East, felt a need to help the Mohammadzadehs. She contacted the writer and asked if there was a fund to help support the couple. Pam said, “Their story touched my heart and I don’t really know why. I have never ever before responded to something that I read in the paper and I know some people do, but I am not one of them. I contacted the person who wrote the story and asked if there was a fund for them and if there was a way I could make a 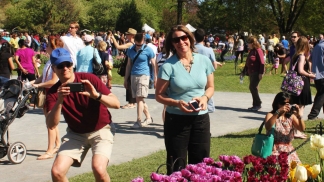 contribution….and she said ‘Why don’t I just put you in touch with Danyal directly’ and she did. It turns out I was the only person who had responded to the article and it was a time when Danyal and Mariam were at a crisis point in their life. They were essentially homeless. They were seeking asylum and had no allies, no friends, and were struggling.”

Pam emailed Danyal simply asking how she could help.  A member of Delmar United Methodist Church, Pam was in no way proselytizing Danyal. Pam said, “it was about reaching beyond our religions and faith…I mentioned that my church had a very active group called Mission Movers where we gather all the time and collect and distribute household furniture and goods and I was certain that we’d be able to help them out with something that they needed. So I mentioned the Methodist Church that I belonged to very casually and Danyal was so excited about that.”

Danyal considered Pam’s email to him a life-changer. Pam and her husband Dave Gordon became Danyal and Mariam’s U.S. family. Danyal said, “When she emailed me, I was so excited. She belonged to a Methodist Church and here I was studying John Wesley at the very moment. She asked if I had ever been to a Methodist service and I hadn’t. She invited my wife and I to go to a service, and wow, it was amazing.”

That particular Sunday in the winter of 2014 was a turning point in Danyal’s life. Pam said, “The connection between Dave and I and Danyal and his wife as well as their connection to our faith community was almost immediate. They lived with us and other members of our church for quite a period of time. Many members of the church stepped up both in providing them shelter and raising the funds they needed to eventually pay for housing and their basic survival needs.” This was very helpful because Danyal’s employment opportunities were minimal with the type of Visa he had.

The pastor of Delmar UMC, the Rev. Deborah O’Conner-Slater, said “When Pam brought Danyal to church that first Sunday, I was astounded. He is an amazing spirit and just had beautiful insights about scripture. He was fascinated with the understanding of God’s love and the commitment of God’s love that the Wesleyan tradition provided and spoke about. From that Sunday on, Danyal and his wife were here every Sunday, without fai 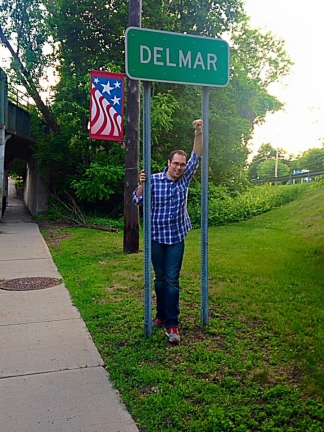 Danyal described what his experience at Delmar UMC became, “Worship each week left me in a peaceful mood. I felt in harmony with nature, humanity, and the world. I could feel an inner revolution in my heart. Indeed, I found the beverage for which my soul had needed for so long. I felt that I wanted to be at the church forever. I wanted to read, sing, and speak at the church. I wanted to eat, drink, and sleep at the church. The church had become my home, my shelter, my haven, and indeed my heaven. My soul was at peace there. I received many joys and eternal gifts. Then, I made decision to become a Christian to keep these safe and shining feelings forever.”

In March of 2014, Danyal formally asked Rev. O’Conner-Slater if he could be baptized on Easter Sunday. Danyal explained, “I wanted to be a Methodist because I realized that if I want to change the situation in the Middle East, I needed to follow John Wesley and his teachings of Jesus…Jesus as a source of peace.”

Rev. O’Conner-Slater happily agreed to do so. She said, “It was the most moving experience I have ever had in ministry. I have never had anyone so deeply touched by the grace of God whose life was profoundly changed. There wasn’t a dry eye in the sanctuary.”

Soon after his baptism and after graduating from SUNY Albany with his second Bachelor’s Degree in Journalism, Danyal took a large leap in his faith journey. He wanted to become an ordained Methodist elder. He approached Rev. O’Conner-Slater with this dream.

Rev. O’Conner-Slater said, “How could I not support him in following this dream? Danyal is a phenomenal, phenomenal individual. He has told me how he wants to sit down and translate every hymn and every book of the Bible into Farsi so that other people would come to know the grace of God. He has such a wonderful mind, what he is truly unfathomable.”

Rev. O’Conner-Slater explained the UNY Ordination process to Danyal and he immediately began his ordination track. Because he is going through ordination, he was able to get tuition waived at Boston University’s School of Theology, where he is studying now. Once he finishes seminary, he can be commissioned as a provisional member for a period of time, after which he becomes eligible to become ordained as an elder.

While Danyal and Maryam continued to struggle with financial stability after moving to Boston, Danyal’s trust in God remained solid. Danyal and his wife were only permitted to work 20 hours a week at minimum wage, which they did by pulling 10-hour days on the weekends.

All the while Danyal has been on his journey of faith, he has also been on a journey to be granted asylum; legally, his status changed from having a U.S. Visa to becoming a U.S. asylum seeker.  Legal fees were exorbitant, but a lawyer was willing to work on his behalf as long as he was willing to eventually pay the fees.  In the fall of 2016, Danyal and Maryam were granted asylum!

To learn more about Danyal and Maryam, click here to read the YouCaring page that Pam and Dave Gordon set up for Danyal and Maryam. It documents their journey. Here, you can also help celebrate the amazing breakthroughs and blessings in Danyal's and Maryam's lives with a contribution and note of congratulations. They both still have considerable educational and living expenses, and the attorney who assisted them with their asylum case seeks his 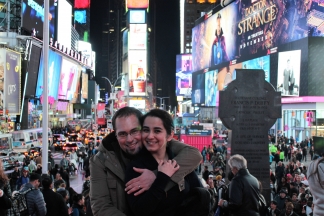 You can hear Danyal tell his story in a video of Danyal filmed by UNY COnference videographer at https://vimeo.com/191804709.

Sit back and reflect on Danyal’s story. Because one United Methodist invited a foreign couple who were lost and despaired to church and because Delmar UMC welcomed Danyal and Maryam with open arms, the world will eventually have the first Iranian ordained United Methodist Elder. Extending your hands to people in need can most certainly fulfil the United Methodist mission to “make disciples of Jesus Christ for the transformation of the world.”