How Bridgeport UMC connects with its community

August 9, 2021 / By Shannon Hodson / .(JavaScript must be enabled to view this email address)

When the question, “What does this community need?” was posed at a ministry meeting at Bridgeport UMC in 2019, the team members weren’t expecting an idea that would keep them awake at night...for many nights. They wanted something fresh, something new, yet something needed. The pastor at the time, the Rev. Dian 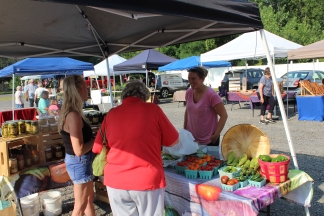 Ministry team member Judy Shepard said, “When Diane said that, the room was so silent you could hear a pin drop.”

Bridgeport UMC is in a food desert; it takes area residents at least 15 minutes to drive to a grocery store. A farmer’s market right in the center of town at Bridgeport UMC could help solve that issue.

And so, it began. Leaders at Bridgeport UMC met with Jim Brownson, a church member and local farmer who educated them on everything they needed to know to legally start a farmer’s market.

In June of 2019, the church launched their farmer’s market in their parking lot with four vendors; the market hours are Thursdays from 3 p.m. until 6 p.m. from June until mid-October. In 2020, despite the coronavirus pandemic, the market grew to six vendors and now in 2021, there are eight vendors…some are farms, and some are crafters.

On a sweltering August Thursday this year, the market was bustling with customers. All the vendors greeted customers with warm smiles.

Nine-year-old Maddie runs the Brownson Farms booth with her mother Melissa. The farm that was once her grandfather Jim’s became her dad and mom’s when her grandfather passed away last year.

When asked if she is going to run the farm when she grows up, Maddie responded, “That’s probably going to be my brother’s job.” Her brother is 13.

For now, though, Maddie loves showing up at the Bridgeport market on summer Thursdays, selling everything from cucumbers, zucchini, and okra to pickled asparagus and homemade jam.

Maddie said, “I like coming here every Thursday. Everyone is really nice here.” 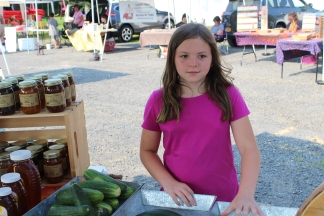 There are two other young sellers at the Bridgeport market as well.

Nine-year-old Jacob Colinsky runs the Jacob’s Farm Stand booth. He started a farm stand in 2020 at his family’s farm, Jack Rabbit Farms. He was struggling with quarantining.

He said, “It was nice to start the stand because I could talk to people again.”

Twelve-year-old Lawrence Landry of Landry Farms sells eggs from the “1,000 free-range chickens” they have on their farm.

Many artists have booths at the market too.

Sue Rubin has a booth where she sells handmade beaded, metal-smithed, and enameled jewelry. She attracts customers with her vibrant purple tablecloth and a bargain basket, with earrings and bracelets priced at two for $5.

Some of Sue’s earrings are repurposed from things like copper pipes or a marble chessboard.

Sue values the farmer’s market not so much to earn income, but because of the validation she receives from passers-by. She said, “What I like most about being at this market is that my pieces are complimented a lot and it validates my work... I like to think that a part of me is in them when they wear my jewelry. Every piece means something to me. I remember making every single piece. Each one had its own journey.”

The Rev. Beth Quick Beth is an Upper New York Methodist pastor, currently appointed to Drew University where she is working on her PhD on th 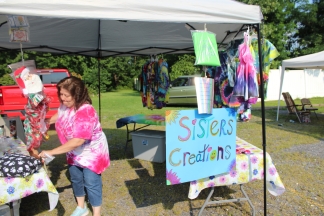 Perhaps the most popular attraction at the Bridgeport Farmer’s Market is what the church volunteers offer in their five booths.

Some churches have annual bake sales, craft sales, or chicken barbeques. Bridgeport UMC does all three every Thursday at their farmer’s market. The group of volunteers are church members who call themselves “The Friends of Bridgeport.”

The “Friends,” as they are referred to have two hand-made craft tables. Kathy Bachlawn described one of the craft booths; she said, “This booth is called the Missions of Dorcas. It’s named after a woman in the bible who dedicated her life to helping those that were less fortunate than her.”

Some people know Dorcas as Tabitha; Dorcas is Tabitha’s Greek name. This booth offers wheelchair and walker bags, pillowcases and more made by a group of four to seven volunteers who meet at the church on Mondays to sew.

Kathy explained that much of the fabric is from samples that furniture stores don’t need anymore. She said, “When we decided to do this booth, I called every furniture store around and asked for samples; now they regularly set aside samples for us.”

Jeanne Brown was at the other Friends’ craft booth, which offered placemats, aprons, plants, plant hangers, pillowcases, and Christmas decorations.

Another Friends’ table offered fresh fruit and baked goods (like pistachio bread, cherry bread, and oatmeal raisin cookies to name a few). Carol Benedict said, “We bake at the church kitchen every Monday, Tuesday, and Wednesday, and we end up with six or seven different types of cookies and breads.”

She continued, “All of the recipes are at least 50 years old; people are eager to have good old-fashioned cookies.” 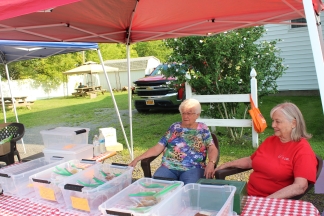 Diane Taylor also at the booth showcased big baskets of peaches and blueberries as well as smaller containers. She explained how another great thing about the market is that the small containers of produce are brought to senior shut-ins who most often live alone.

Diane added that there is a bus that the ecumenical council that she serves on was able to buy with a New York State grant; this bus brings seniors to the market to shop.

Diane said, “The seniors are given a $3 voucher and we reimburse the vendors. Some seniors use them; others use their own money.”

Bridgeport offers a prayer tent at the market as well; managed my Bridgeport UMC member Norma Dean; she displays artifacts from a trip she went on with Upper New York Area Resident Bishop, Mark J. Webb, to Israel. She also collects prayer requests that the current pastor, Omar Hall, prays over every day that week and that she and her prayer partner pray over.

Each week, the chicken barbeque tent, managed by Bridgeport’s office administrator, Shirley Pease, has 50 chickens to sell and on this scorching Thursday, they sold out by 4:30 p.m.

Overall, this market offers many ministries to the Bridgeport community at one time and in one place. Judy said, “With COVID last year, this market kept our church afloat and connected us with the community.”

Diane Taylor added, ““It’s really not about how much we make; it’s about what we do for the Lord.”

Editor’s Note: If your church is interested in starting a farmer’s market, Judy Shepard would be delighted to talk with you about the process of starting one up. Feel free to call her at 315-378-7759.