From the Advocate: Camp Culture 101

May 4, 2016 / By UNY Communications / .(JavaScript must be enabled to view this email address) 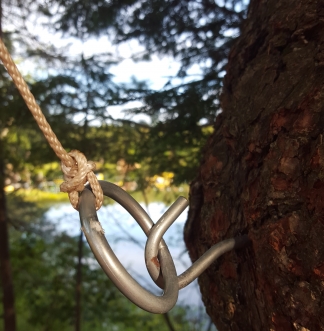 Walter Stacy, service manager at the Aldersgate Camp & Retreat Center from 1965-1980, remembered playing the ring and hook game as a child, probably on the farm in Phelps, where he spent some of his early teen years. Sometime in the late ’60s, he saw the game again, remembered how much fun it was when he was a kid, and thought the campers (and staff) at Aldersgate would like it, too.

He constructed the first one on a tree just outside the dining hall so campers waiting to go in before the meals would have something more to do. It became such a success that a second one soon appeared. Thirty or so years later, the trees were removed, and the ring and hook game disappeared.

Last summer the ring and hook game returned to the edge of the bank down to the lake near the porch of Walker Dining Room, a welcome sight to many.

How to make your own ring and hook game: Pick a good tree that has branches that are about 8 feet off the ground. Tie a ring (about 1.5-inch diameter) to a string or thin rope then tie this to a branch of the tree at least four feet from the tree’s trunk. Note: The string should be just long enough to be able to reach the hook. Put the hook (a screw hook) into the side of the tree trunk – or it can be directly on the front of the tree trunk – at about eye level.

Rules: The game has very few rules. Swing the ring until it catches on the hook. Take turns. Have fun, but don’t forget to go in to the dining room and eat when it’s time! 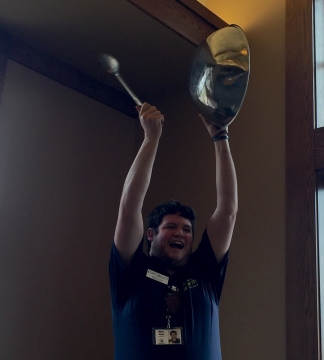 One of the mainstays at Casowasco for the last 25 years has been the “Chocolate Pudding Cheer.” This cheer is eagerly-anticipated by campers every week. Chocolate pudding is typically served as the dessert on Friday’s lunch – the last meal – and is one of the last things campers experience together. The cheer is led by a staff member with a big stainless steel bowl and a large spoon (see photo at left), and it goes like this:

Everyone repeat after me!

Get a big spoon!

Get a big bowl!

BOOM! Get a big spoon, bigger than a big bowl!

BOOM! Get a big bowl, bigger than a big spoon! 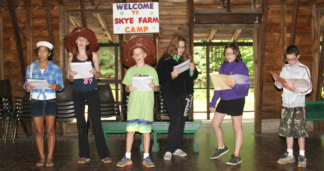 One of the great traditions at the Skye Farm Camp & Retreat Center is singing after meals. It’s a way to get campers moving again and continuing to introduce them to new songs. Most songs have motions associated with them, which helps campers remember the songs throughout the week and throughout the off-season. It’s a chance to strengthen bonds.

After breakfast, there’s usually a really upbeat and fast song, for example, “Rise and Shine” or “Alive, Awake, Alert, Enthusiastic.” These are to encourage excitement about the day ahead and wake the campers up! After lunch, we sing a quieter, more mellow song, such as “Father, I Adore You” (with hand motions) because after lunch, it’s a camp-wide rest time. Dinner is usually followed by another upbeat song because the night is still young, and there’s still so much to do!

These songs are learned in the dining hall and hardly ever forgotten throughout a camper’s lifetime. Asking any camper about a moose named Fred or the music master will immediately illicit a song – because obviously, they can’t just be described. Ask with caution! 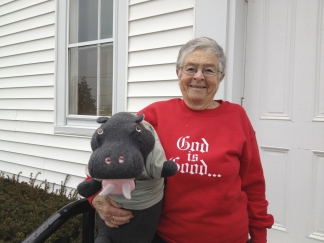 The legend of Harvey the Hippo – the unofficial mascot at the Sky Lake Camp & Retreat Center – began with a song written by a summer staff member, Steve Hulslander, in the early 1970s. From the earliest days, countless campers have taken to this 4,618.5-pound hippo, who, according to the song, manages to consume 200 pounds of food every day.

In the early 2000s, the legend began to take physical shape when the Rev. Joyce Allen came across a delightful stuffed hippo created by her former parishioner at the Worcester UMC, Emma Gaylord, and procured it for Sky Lake. “The moment I saw that hippo, I just knew he belonged at Sky Lake,” said Rev. Allen.

After several years of spending time with campers, going on church visits, and taking part in a number of photo projects, original Harvey began to show some wear and tear. Fortunately, in 2013, the talented Brookye Keeney – who co-leads Creative Arts Week each summer at Sky Lake with her husband, the Rev. Nick Keeney – refurbished original Harvey and created two replicas, ensuring that the legend of Harvey the Hippo will continue to live on for generations to come. 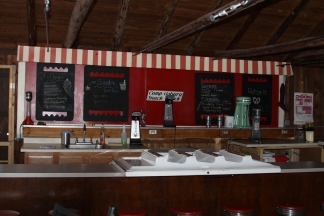 Since the 1950s, Asbury’s Snack Shack has been entertaining guests with its soda fountain counter. Many a tasteful treat has refreshed a participant on a hot summer day with daily special s of ice cream floats, sundaes, and shakes. Ice cream dipping and Christian music and dancing add to the memories made, as guests build relationships among conversation and simple arcade games. Sipping on a soda or licking an ice cream, the Snack Shack is the place to be to meet new friends.