The First UMC Oneonta congregation is sending a mission team to Jamaica from July 23 to August 3. The church has been in partnership with the people of St. Thomas Parish in Jamaica for over 15 years.

St. Thomas Parish is in the far southeastern corner of Jamaica, the poorest section, far removed from the popular resort areas. St. Thomas' primary means of income are the sugar cane plantations. In 2000, First UMC Oneonta began work with the Moses Baker Primary School and Isaac Barant Medical Clinic in Golden Grove. Moses Baker was one of the poorest schools on the island, a three room shack made of plywood and tin roofing pieces. Each team would make repairs and add paint and materials to this tiny school until in 2007, just two weeks after the team returned, Hurricane Ivan flattened the school and undid all the work of the team and the community. First UMC committed at that time to build a hurricane-resistant school. This was completed in 2011 and the new building was dedicated in January of 2012. 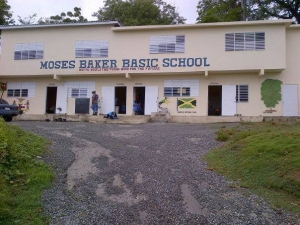 Since then, the principal, Ms. Mahdoo, has secured funding from various sources to build a second floor and outfit a computer lab. Today, Moses Baker is considered one of the best schools on the island. The First UMC Oneonta team will finish paintwork on the interior of the second floor and will build some portable playground equipment. Because Moses Baker School is now nearing completion, First UMC Oneonta will be partnering with a new school in this upcoming trip. They will be working with First Steps Preschool and Early Learning Center in Duckenfield, also in St. Thomas Parish. Duckenfield is a refugee community pieced together after the many hurricanes of the last few years. Those able to find employment in Duckenfield work primarily at the sugar plantations run by the Chinese government.

First Steps School was started two years ago by a young woman, Miss Stacey Ann Henry; while working on her education degree, she saw the great need in the community. She used some inherited land she received and constructed a one-room school house, starting with 10 students. 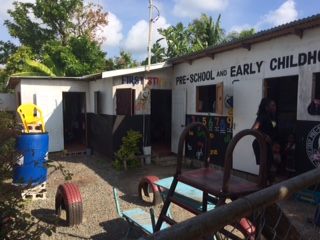 Today she has 54 students and three teachers. She quickly constructed two additional rooms using funds she was saving for her education, trusting that tuition fees (which are modest) would cover her education costs. They did and she will be completing her degree this December.

The First UMC Oneonta team will help complete work on the original structure and two new additions, and we will also help to install a security fence around the small school to keep out roaming dogs, chickens, and goats—and to discourage vandalism and theft. Miss Henry is arranging for the community to work alongside First UMC Oneonta at the site.

The First UMC Oneonta team will consist of 13 members. The team leaders are Doug Sivers and Lori DePauw, both having led other teams and having traveled to Jamaica several times. Their young adult leaders are Leslie Kintner, Zach Gracy (attended as youth), Esteban Cruz (attended as youth), and Kirsten Qua (attending as youth). Youth attending are: Kayley Qua, Hunter Roy, Emily Kuhlmann, Jacob Robinson (from Elm Park UMC), Jacob DePauw, Aidan Sivers, and Josh Grimm. Another team will be traveling to continue their work in 2018. First UMC Oneonta welcomes  anyone who wishes to participate.