Dr. Kenda Creasy Dean will serve as the study leader at the 2017 Upper New York Annual Conference session, which takes 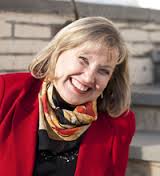 “I’m delighted to be at Annual Conference,” she said. “There are lots of people that I love that are serving in the Upper New York Conference. I’m really happy to do it.”

Dean will host two study sessions during this year’s Annual Conference session, which will focus on innovation in ministry with young people, with biblical overtones.

Session one is titled “Love Made Me an Inventor: Why an Entrepreneurial Church Matters to Young People,” and session two is called “Doing a New Thing: The Church Has No Excuses.” The two sessions focus on doing new things and touching on Bible passages that speak to this, such as 2 Chronicles 7:14 and Revelations 21:5.

“The Bible begins and ends with the story of God innovating and the role that The Church has played in innovation,” Dean said. “I’m hoping that we’ll poke the box a little bit to see where this might be leading the Upper New York Conference when it comes to doing new things, particularly where young people are concerned.”

She said many churches today are afraid of trial and error, that taking a risk seems “terminal.”

“It’s the opposite impulse we need to follow: We need to risk more, not less,” Dean said. “There’s no magic bullet … it’s a matter of testing and trying and experimenting until we discover where our hopes and God’s mission come together, and that takes an awful lot of trial and error.”

Dean encourages those attending AC2017 to bring ideas with them to discuss.

“Let’s play with it while we’re there and make The Church a place where new ideas are brought to life, rather than a place where ideas go to die.”