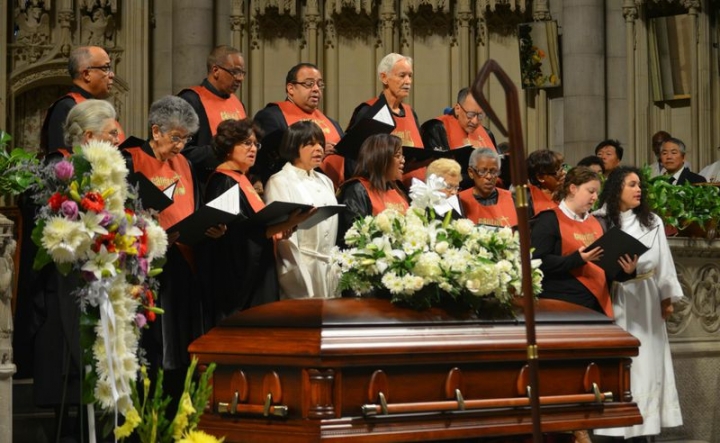 September 16, 2014 / By UNY Communications / .(JavaScript must be enabled to view this email address)

NEW YORK CITY – In song, dance and words, thousands of mourners, including dozens of bishops, celebrated the life of New York Area Bishop Martin D. McLee during a moving service at the Riverside Church in New York City on Monday, Sept. 15, 2014.

Bishop McLee, 58, died Sept. 6 after an illness, just over two years after he was elected a bishop of The United Methodist Church.

Led by the Northeastern Jurisdiction College of Bishops President Bishop Marcus Matthews, who consecrated McLee in July 2012, fellow bishops described how painful McLee’s death was, even as they celebrated the joy of a life well-served to God.

“Our pain, of course, lies in the fact that we are bidding too early a farewell to our beloved colleague Bishop Martin McLee. The joy is from seeing so many of you, whose lives have been touched by Bishop McLee. Indeed Bishop McLee always asked us to watch each other’s back,” Bishop Matthews told the mourners.

Council of Bishops President Warner Brown described McLee as a bishop of the church with a passion for embracing the marginalized, joyfully calling for a day acceptable to God and calling the best out of God’s people.

“He had the courage to seek justice, mercy and love because he walked humbly with a God who would never leave him alone,” said Brown, who is also Resident Bishop of the San Francisco Area.

Brown told members of the McLee family that the bishops and the entire United Methodist Church were holding them in prayers. “But even though we are sad that we will be deprived of the joy of his companionship, we rejoice that we have witnessed the life of one of God’s very special people.”

He noted that while some people may have found the way McLee preached and rapped and sang to be unconventional, “McLee used all the gifts he had to turn a light on in the eyes of those for whom the light of hope had gone out.”

The service featured several congregational songs that McLee loved as well as selections by the Broken Builders, the New York Conference Quartet and Mark Miller, composer in residence at Drew Theological School in Madison, NJ.

As the congregation sang “A Mighty Fortress is Our God,” the clergy, led by bishops, processed into the Riverside sanctuary and together recited Psalm 23 led by Renata Smith, Conference lay leader and Episcopacy Committee member

Retired Bishop Alfred Johnson, lead pastor at Church of the Village in New York City and the pastor to McLee family, offered a prayer of comfort, reminding the mourners that McLee lived life with a purpose.

Bonnie Marden, chair of NEJ Episcopacy Committee, talked about the joy that McLee brought to the jurisdiction and how he dared to address issues that were uncomfortable to some people in the church.

Speaking on behalf of the NYAC Cabinet, the Rev. Adrienne Brewington, dean of the Cabinet, said McLee was courageous enough to confront the issue of human sexuality so often divisive in the church. She said he was always calling for an inclusive church regardless of race, age, gender or sexual preference.

It was Beverly Mason, a family representative and first cousin of Bishop McLee, who brought the celebration to tears and to laughter as she described the loving nature of McLee, who was known as the Duke in the family. “We see and embrace all of you for the love you have shown for our little brother, Martin.”

The Rev. Jay Williams, lead pastor of The Union United Methodist Church in Boston, where McLee pastored and helped Williams answer a call to ministry, echoed the courage of McLee to confront the issue of gays and lesbians in the church at the time when most people were not talking about it. Referring to McLee as “McBishop,” Williams declared: “You were a courageous and prophetic preacher and you were not ashamed of the Gospel.”

The Rev. Dr. Zan Holmes, a retired UMC pastor who inspired McLee to enter ordained ministry, fired up the service as he talked about how much McLee blossomed wherever he was planted and was not afraid, even in the last days of his life. 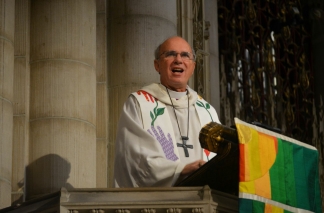 “Oh, yeah!” was the response McLee texted to Holmes after he assured him about God’s presence in those trying times.

After Dr. Leslie Duroseau danced gracefully to “God is Able,” a composition of Miller and adapted from a prayer by Martin Luther King Jr, and after the combined choir rendered a soul-lifting rendition of “Total Praise,” Bishop Peter D. Weaver, retired, who is executive secretary of the Council of Bishops, delivered the eulogy.

Weaver hailed Bishop McLee as a leader who was eager to have the church engage the community because he believed and saw the cross of Jesus at the heart of human life, pointing out that rather than polarize or pulverize, McLee called for inclusion and love of everyone, “the whosevers” mentioned in John 3:16.

“That love was meant to be shared by everybody. It was authentic and real,” Weaver said as he closed his sermon by “opening the doors of the church,” saying it was something that McLee always did at the end of his preaching.

During the commendation, Bishop Sudarshana Devadhar of Boston Area and Bishop Sandra Steiner Ball of West Virginia, used McLee’s own words to call upon God to receive McLee and honor him for all the work he had done for the church and for the lives he had touched.

As the casket was being wheeled out, Miller played “Draw the Circle Wide,” leading some mourners to form a semi-circle in the narthex of the church as the bishops escorted the casket.

Bishop McLee was born on Sept. 10, 1955, to Robert E. McLee and Pecolia B. McLee in Brooklyn, New York. He graduated with honors from Hunter College with a bachelor of science in Health, received a master of science in Education from Fordham University, and juris doctor from the Thurgood Marshall School of Law at Texas Southern University in Houston. He later went to the Southern Methodist University in Dallas to receive his Master of Divinity.

Bishop McLee was nurtured as a youth at Cuyler-Warren UMC but was also a son of the St. Luke “Community” UMC in Dallas, Texas, where he responded to the call to ministry under the leadership of Holmes.

He served as bishop, district superintendent, pastor, professor, activist, justice advocate and public school educator. He also served as president of the Northeastern Jurisdiction’s Multi-Ethnic Center, vice president of the Strengthening the Black Church for the Twenty-First Century Initiative, and on the boards of Drew University, New York Theological Seminary and New York Methodist Hospital

Martin D. McLee was elected a bishop on July 19, 2012; he was consecrated on July 20, along with Bishop Mark J. Webb and Bishop Steiner Ball.

He is survived by two sisters, two brothers and several nieces and nephews. 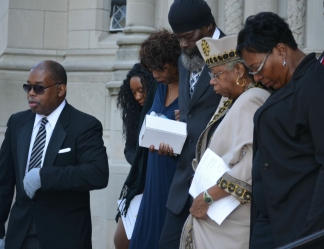 Story and photos courtesy of the Rev. Maidstone Mulenga; he is the Assistant to the Bishop in the Baltimore-Washington Conference and was the editor of the 2012 NEJ Daily Christian Advocate when McLee was elected bishop.