Before I write something about the wonderful increase of the Ministry Shares at the Champion UMC in 2016, I would like to offer a special thanks to my congregants who have received a Korean female pastor as their spiritual leader with their welcoming heart and love. The Champion UMC is one of the two parishes that I began my Christian ministry as a local pastor in July 2015. Since then, the Champion UMC has been a delightful kingdom family to me. 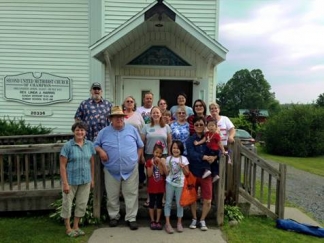 The Champion UMC was one of the six parishes under the leadership of one minister before my arrival. The six parishes had shared one clergy for nine years. With collaboration of few devoted lay speakers in the parishes, the congregation hardly maintained the church service Sunday by Sunday for many years. My congregants stated that inconsistency of the pulpit was the major factor that caused the decline of the congregation. In spite of the hardship, the strong commitment, faithfulness, and sacrifice of the few remaining congregants had maintained the church.

The Champion UMC was organized in a rural community of the northern region in 1827. The Champion UMC has great potential, wonderful spiritual heritage, and strong unity. It is a rural church where people are connected to one another, rejoice together, and support one another. We celebrated the 189th church anniversary and invited our old church members to the service this year. The number 189 does not have any special meaning attached; however, by remembering and celebrating our church tradition, we renewed our dedication to serve the Lord and our church.

Set a priority for the Ministry Shares

After our church anniversary, congregants made a critical decision. The congregation made a commitment to set aside 50 percent of the offerings from the second Sunday of each month to pay the ministry shares. It was a consensus made within the congregation. It required each congregant great courage and faith in God, the Provider, since church finances had always been an issue in the congregation. The Champion UMC used to pay the apportionment at the end of the year after paying pastor’s salary and all other bills first. Now, the Champion UMC has set the ministry shares as one of its top priorities. It was a critical change at the congregation.

The consistency in attendance and finances

As the pulpit has been consistent by one lead pastor, the Sunday attendance has also been consistent. Our lay speaker, Linda Wiltse,  stated that there was a season when people couldn’t even expect who would be in or not be in the sanctuary each Sunday. Due to my background as a social work researcher, I believe that statistics and numbers give important messages to us. I found that the congregation stopped recording the weekly attendance several years ago. Now, we have a devoted congregant whose Sunday mission is to count the numbers. The average Sunday attendance has become consistent in every quarter and increased about 46 percent compared to before and after the six-parish structure. Along with the consistency and increase of the regular attendance, the church finances have naturally and gradually increased as well.

Although it is a small rural church, the congregation has made a wonderful vision to be a missional church for the nations. I have helped the congregation to actualize its vision by making a connection between the congregation and a Christian NGO in Malawi. The Champion UMC did not do any special fundraising events to increase our Ministry Shares or church incomes, but they did a fundraising to help children in Malawi with the Carthage UMC. I believe that God always blesses and specially uses local churches and individuals who are committed to do missions for the nations. In our congregation, the Church, Society, and Missions committee didn’t exist, but we newly formed the committee this September. The committee is new to us. I believe that this small rural church will be continually vitalized by the Spirit of God, as it reaches out people in our global community

I understand connectionalism as a vital relationship in the UMC. I believe that the relationship should be mutual, interactive, and based on mutual trust between the local church and the Conference. The congregants commented that there was a time when they honestly felt that their voices were unheard by the Conference. However, once they gained consistent leadership, they found new hope for spiritual growth and the trust between the local congregation and the Conference was naturally restored. They carefully heard my concern and followed me regarding the apportionment.

The Champion UMC is a place where people feel the presence of God every Sunday morning. We don’t even have a pianist. We worship with a CD player, but we are a true worshipping community where passionate worshippers praise and honor our Lord, Jesus Christ in freedom. Before I wrote this article, I had a conversation with all of the congregants and separately with our lay speaker to know more about their honest opinions about the Ministry Shares. They stated that they feel that they are now spiritually being fed, and because they are spiritually satisfied, they want to give more back to the Lord.

There was no special education or strategic meeting to develop a plan to increase the apportionment at our congregation. I don’t have any formula or knowhow about the matter. However, I can say with confidence that the Champion UMC is being empowered and revitalized by the Holy Spirit, and devoted to do the will of God as a missional church. These are the major factors that made this small rural congregation to be a cheerful giver.