Christ in the City offers hope

June 5, 2019 / By Shannon Hodson / .(JavaScript must be enabled to view this email address)

For the past three years, the Syracuse United Methodist Churches has hosted a worship service called, “Christ in the City,” the afternoon before the Upper New York Annual (UNY) Annual Conference session begins. Held at Columbus Circle, only a few blocks from the Oncenter in Syracuse, where the Annual Conference is typically held, this service includes music, praise and worship, a message, and testimonies of faith.

This year, things didn’t go as planned. It was a cold and rainy afternoon and the band somehow forgot about the event. This did not stop the pastors of the 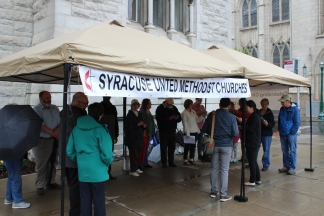 The tent that was intended for the band and pastors became the worship space. The evening started with 15 people, unlike previous years when the event begins with about 40-50 people, but Pastor Song reminded everyone present of Matthew 18:20, “Where two or three are gathered in my name, there I am with them.”

Rev. Norrix made light of what some would consider an unfortunate situation. He said, “If you want to renew your baptismal vows, stick your head out of the tent for a moment.” He also mentioned that the tent is reminiscent of the tent revivals that marked the beginning of the Methodist movement in the United States.

What did worship look like without the band? Everyone simply found song lyrics on their mobile devices! The first song was chosen by Pastor Song was On Christ the Solid Rock I Stand.

More hymns were offered up by those present and the worship ended up consisting of 6-8 songs—the beautiful singing struck interest of passerby and the number of attendees grew to almost 30.

Pastor Song’s message was about hope. 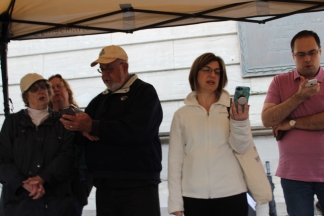 Pastor Song mentioned situations where we feel hope: the Friday before the weekend, the nights leading up to vacation. We have hope in anticipation.

Pastor Song asked, “If we have hope for the weekend or a vacation, shouldn’t we have hope in the eternal life offered by Jesus?” She referenced the lyrics in On Christ the Solid Rock I Stand, “My hope is built on nothing less than Jesus’ blood and righteousness.”

What does it take to have this hope? Trust in Jesus. Pastor Song quoted Romans 8: 38-39, “ For I am convinced that neither death nor life, neither angels nor demons,a]">[a] neither the present nor the future, nor any powers, neither height nor depth, nor anything else in all creation, will be able to separate us from the love of God that is in Christ Jesus our Lord.”

Pastor Song then offered her own testimony. While in seminary in 2015, Pastor Song started looking for jobs and there were no bites. She became in a state of despair, losing hope. She feared that being a foreigner (from South Korea) in the United States that folks didn’t want her as a pastor.

At the start of 2016, Pastor Song decided to begin reading a chapter of the bible every day to help herself regain hope. She started with the book of Psalm. On January 27, she pondered the words of Psalm 27, the last verse reading, “Wait for the Lord; be strong and take heart and wait for the Lord.” That very day, Pastor Song received an appointment opportunity from the Upper New York Conference. She prayed about the opportunity and accepted the offer. Pastor Song’s hope was restored.

Pastor Song mentioned that despite English being her second language, she’s slowly learning the language’s euphemisms. She said, “I now know the saying ‘When it rains, it pours,’” pointing to the pouring rain outside of the tent, but my new saying is, “When God provides, he pours.”

Hope can be found even in the pouring rain. This is what Syracuse United Methodist Churches proved to be true on June 4, 2019, the afternoon before the start of the tenth session of the UNY Annual Conference.