August 16, 2018 / By Shannon Hodson / .(JavaScript must be enabled to view this email address)

This past July, Central New York United Methodists were both on the supporting end and receiving end of amazing ecumenical mission work – Syracuse Workcamp 2018. This mission work involved over 300 youth from all over the country of several different denominational backgrounds coming together to work on repairs needed in 54 homes in Syracuse.

How did Syracuse Workcamp 2018 come about?

Syracuse Workcamp 2018 came out of a partnership between Onondaga Hill Presbyterian Church and Group Mission Trips, a Colorado-based organization that sends thousands of youth groups all over the country to work on homes that are in desperate need of repair.

Having a Workcamp project come to Syracuse was over a decade in the making. Pastor Bob Langston, of Onondaga Hill United Methodist Church, had a vision to bring Workcamp to Syracuse about 14 years ago. The leadership team at his church approved of the project two years ago.

Once that was complete, members of the leadership team had to survey over 200 homes that applied to be considered for the Workcamp group to work on their home. Knowing the group coming would have 300 teenagers meant that 54 homes had to be chosen to be part of the project because the crews that work on each home consist of five to six individuals.

“Mike was so instrumental in making Workcamp a success in our community,” Pastor Bob said. “He went above and beyond. I can’t say enough good things about the guy. At the beginning, he connected us with so many resources. He was able to get smoke alarms from the Red Cross, and because of him, we had 114 smoke alarms installed in 39 homes. He spent hours of his time surveying the homes and once the Workcamp week was finished, he offered his time to wrap up some of the homes that needed finishing touches, liking having a window or door installed.”

What was the theme of Syracuse Workcamp 2018?

The theme of Syracuse Workcamp 2018 was GRIT.

While youth were in Syracuse to work on homes, their physical work was undergirded by spiritual grit gained through engaging in devotions every morning, lunch time, and evening as well as fellowship-based programming and worship every evening.

The three devotions per day the Workcamp youth, between ages 13 and 21, engaged in with their adult site leaders and often the residents of the homes they worked on focused on developing spiritual grit through courage, forgiveness, trust, surrender, and love.

“As our spiritual grit grows, we gain a growing and deeper confidence as we walk with Jesus,” said Kris Caswell, a site leader.

How does Workcamp build relationships? 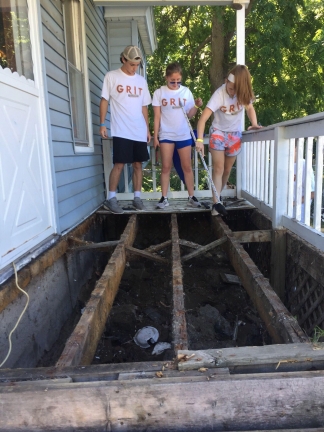 Mike Block said, “It was amazing to see what could be accomplished when all these kids from different denominations came together. They worked hard and were happy doing this work. They were receptive to help and made a lot of residents happy.”

Cindy Kissane, also a member of the Syracuse Workcamp leadership team, oversaw hospitality, welcoming the kids at West Genesee High School and visiting their sites with treats and drinks.

Cindy mentioned how members of dozens of churches throughout the Syracuse community were eager to help and that she built relationships with many of them. One woman she came to know through Workcamp 2018 was Jean Whipple, who leads the sandwich ministry at the Camillus First United Methodist Church.

“Jean is amazing and her willingness to help was impressive. She came every day with cookies for the kids, Cindy said.

Pastor Rose Kingsbury, of the Onondaga Nation United Methodist Church, was among the residents who had a Workcamp crew work on her home. They completely renovated her porch that had rotted out.

Rose spoke highly of Jason, the crew leader at her house. She joined the group at their devotion time.

“Jason was exceptionally gifted in that he brought people together,” she said. “He made the kids feel comfortable and connected, while talking about their faith. It was cool to see.”

Nineteen-year-old Karen Caswell, Kris’ daughter, has been on six Workcamp trips, including the one in Syracuse, and has maintained several faith-based friendships with people on previous crews. This year, her crew worked on cleaning and painting the home of an elderly woman named Vera. While Vera did not participate in the devotions, Karen said, “Vera was full of compliments to all of us every day. She was so happy to see us transform her house. She said to me once, ‘I see God through you.’”

How does Workcamp strengthens faith?

This year, Karen was the oldest on her team and was the devotion leader. She said she deeply enjoyed engaging the kids on her crew in discussions.

“I felt like I had something to offer them in my own experience and realized how much I have grown in my faith through these mission trips,” she said. “One of my crew members wrote me one of the nicest cards I’ve ever received. He said that I was a role model and that he strives to have the faith I do every day. I have been so touched to know that God’s light is shining through me.”

Cindy’s husband, Tim Kissane, was also on the leadership team; he helped survey all the homes to make sure they we 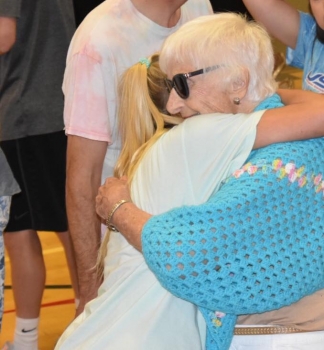 re safe for the Workcamp kids.

“What amazed me about Workcamp is how the kids would draw residents into their devotion and prayer time, residents who maybe didn’t know the love of Christ but were experiencing it for the first time through other people,” he said. “You never know what kind of transformation these kids might be making.”

Cindy piggybacked off Tim’s comment, saying, “We’re showing the community what people can do when they are called by God to help others.”

One Workcamp teen was so transformed by his Workcamp experience that he asked his pastor to baptize him. He was baptized in Shove Park in Camillus.

“The whole nature of the program is to be relational and transformational,” Pastor Bob said. “When local government, community organizations, local faith families, and kids from all over the country team up together, how could it not be?”

Cindy mentioned the effect she noticed the program having on neighbors. She said, “The ripple effect goes far beyond anything we could imagine.”

Pastor Bob indicated that perhaps neighbors would be inspired to better their homes.

On the final day of Workcamp, residents were invited to West Genesee High School for evening programming. A Group Mission Trips representative told Pastor Bob it was the largest resident turnout he can ever remember.

Fifty-four homes were improved in the Syracuse community and hundreds of people, maybe even thousands involved in Workcamp, were transformed and brought closer to God.

This is mission work at its best.