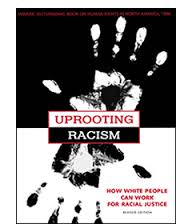 We have all been in the situation of being told a joke we are uncomfortable with. Sometimes we realize it’s racist right away. The last time it happened to me, it didn’t come out until the punchline. It’s uncomfortable to interrupt racist comments but we have to do it anyway! At some level, the joke teller knows the joke is inappropriate, so speaking up IS educating both the teller and the bystanders. Your comments may also give others the courage it takes to be a vocal racial ally.

I have a sign in my office that says “If you are neutral in situations of injustice, you have chosen the part of the oppressor.” None of us want to be part of this bullying any longer. So how do we do it? Paul Kivel says there are no right or wrong ways, and the more we do it, the better we get at it. We can say something short and sweet like, “Please stop right there.” I once said in response to a racial joke, incredulously and in a moderate voice, “That’s not funny.” The joke teller said defensively, “To me it is,” and that was the end of it. Now it’s up to him to decide about telling a racist joke to anyone in the future.

Ask God to give you the courage to be a positive influence and an anti-racist example to others. These are good seeds to plant!