Black and Indigenous Solidarity with Palestine

Editor's Note: This is the second in a series, “Because We Care” from our UNY Task Force on Peace with Justice in Palestine/Israel. It examines how their journey into Palestine has intersected with our United Methodist struggles toward Black and Indigenous liberation.

The first “Journey toward Understanding” taken by members of the New York West Area (former Western NY and North Central NY Annual Conferences) was led by our African American Bishop Forrest Stith in January 1989. Our first full day in Jerusalem was on the Rev. Dr. Martin Luther King Jr.’s birthday. For our evening prayer-communion service at the hotel, Bishop Stith reflected on the experiences of the day, comparing it with his experiences as a Black man, and comparing the intifada with the Civil Rights movement of the 1960s. Many of us in the room were moved to tears.

In the months and years that followed, these similarities became increasingly evident, leading to solidarity acts among Black, Brown, and Indigenous peoples, including the 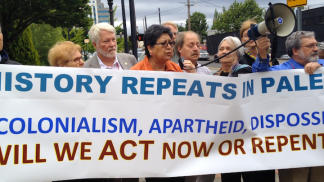 Palestinians. For me the intersection of these issues was highlighted in a simple conversation I had with Laila Hasan, my friend from Hebron-Al Khalil when she visited me in Corning.

Laila was in our Upper New York Area while visiting her brother in Saratoga Springs. When she came to my home in Corning, we walked over to First UMC where she was presenting a program, cooking maklouba for us, and selling embroidery from the Women’s Cooperative in Hebron.

As we were walking down Market Street, she looked up at facades of what we call “historic Market Street” and she asked me how old the city was.

I answered, “well, the settlers came two or three hundred years ago.”

“Settlers?” she asked, with a look of alarm on her face.

I knew the reason for the expression on her face. The Israeli settlers who have invaded Palestinian villages and municipalities are terrorizing the neighborhoods and making everyday activities like harvesting crops and attending school impossible and dangerous for Palestinians.

The Israeli human rights group B’tselem has documented settler violence against the Palestinians for decades. Click here to learn more.

I lived in the Old City of Hebron-Al Khalil. The shop that housed the Hebron Woman’ Cooperative was established during the Second Intifada and was just around the corner from our Christian Peacemaker Team (CPT) apartment.

Militant right-wing Israeli settlers formed enclaves around and inside the Old City, and terrorized the Palestinian residents. I personally saw settlers shooting up the roof top water tanks of Palestinians during a severe water shortage. My teammate witnessed settlers setting fire to Palestinian shops, while the shopkeepers and their families were under curfew in their apartments above the shops.

I wanted to say to Laila that our settlers were not like that. But I could not say that because about 10 miles away from where Laila and I were walking down Market Street, there is a historic marker noting that Runonvea, a Native American village was destroyed in 1779.

I have to remind myself that I live on land stolen from the Seneca and the Lenape. The destroyed village of Runonvea near me and the 40 other native villages and food storage destroyed by General Sullivan’s troops in 1779 parallels the more than 500 Palestinian villages destroyed during the Naqba in 1947 - 48.

The continuing process of annexation, broken treaties, pipeline construction, etc. in my country parallels the continuing Naqba in Palestine with ongoing destruction of Palestinian villages and homes, such as what I witnessed in 1996 when the Israeli military demolished the Jaradat home.

I understand now why the Native American and Black communities identify so closely with the Palestinians in their liberation struggle.

Editor's Note: The photo above is from when Cynthia Kent, chair person, Native American International Caucus, reads the statement of solidarity with Palestine, May 16, 2016, at UMC General Conference in Portland, OR. (Photo from UMKR video, used by permission).