Editor's Note: The Council of Bishops released the following statement on April 20, 2021  after a jury convicted former police officer Derek Chauvin of murder and manslaughter in the death of George Floyd, nearly a year after a viral video of the Black man gasping for breath pinned beneath the White officer’s knee sent millions into the streets demanding justice and forcing a national reckoning on race and policing. 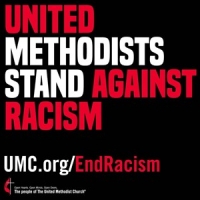 The Council of Bishops stands together with all justice-loving people around the world in prayerfully bearing witness to the jury's decision that convicted former police officer Derek Chauvin of murdering George Floyd.

The racial violence experienced by communities of color has pushed us to think more deeply about how white supremacy functions in our society. We must continue the work of dismantling systemic racism so that the lives of black, Hispanic, Asian, Pacific Islander and Native American sisters and brothers will no longer be needlessly taken. We are called as people of faith to work for a world in which love, peace and justice reign. It is our hope that United Methodists around the world will take up this work as a continuing commitment of our baptismal vows.

As we reflect on the importance of this verdict and on our work in the days ahead, we pray for peace in the midst of truth telling, empathy in the midst of grief and action that leads to healing and greater justice for all of God’s children.