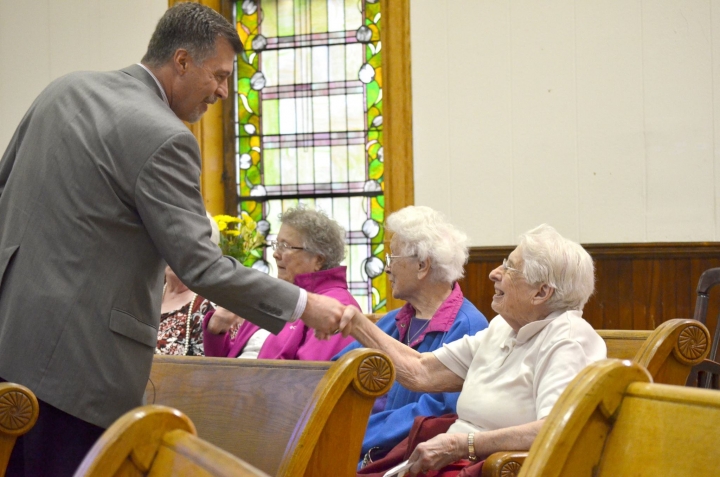 Upper New York Area Resident Bishop Mark J. Webb completed his 2015-2016 District Days tour with visits to the Finger Lakes, Genesee Valley, Mountain View, and Northern Flow districts in March and the Oneonta District in April. The theme of his tour was “Increasing Our Capacity: A Time of Conversation and Encouragement,” and it provided conversation sessions for clergy (in the morning and afternoon), district leadership committees (over dinner), and combined laity and clergy (in the evening). Click here for a full story about the District Days tour.

Videos from the District Days are also available. For convenience, they have been divided into 3 shorter videos: Introduction, Wesleyan Ethos, and What it Means to be Radical.

Finger Lakes District Day
Bishop Webb met with clergy and laity in the Finger Lakes District on March 2 at the Port Byron United Methodist Church during his 2015-2016 District Days. The time with clergy was spent looking at our shared United Methodist Ethos, while the time with laity focused more on leadership and what it means to be radical in our shared mission.

On March 10, Bishop Webb met with clergy and laity in the Genesee Valley District at the Rush United Methodist Church during his 2015-2016 District Days. A variety of topics were discussed at both the morning and evening sessions, but a key topic that spontaneous surfaced was our connected ministry and what that looks like in light of the recent information released about Ministry Shares and the Conference spending plan. Other topics included what it means to be a United Methodist and why Leadership is the most important focus as the Conference moves forward.

Bishop Webb met with clergy and laity in the Mountain View District on March 17. The morning’s clergy session opened with a seven-piece clergy band organized by the Rev. Chad Sayers. When asked the name of the ensemble, one clergy member joked that it could be “If turkeys could fly.” Being that it was St. Patrick’s Day, District Superintendent the Rev. Nancy Adams read aloud a part of the poem “St. Patrick’s Breastplate.” Attendees at both sessions sang “Christ Beside Me;” the words come from “St. Patrick’s Breastplate,” and the melody is “Morning Has Broken.” More than 110 people were in attendance for the evening session, and overflow seating was set up outside the sanctuary.

On March 31, Bishop Webb met with clergy and laity in the Northern Flow District at the Gouverneur First United Methodist Church during his 2015-2016 District Days tour. The Rev. Jane Wagner and Glenda Schuessler provided musical accompaniment during the morning and evening sessions respectively. A delicious lunch was prepared and served by members of the church, and the evening meal with members of the district leadership committee was at the Oswegatchie Coffee Company.

Bishop Webb concluded his 2015-2016 District Days tour when he met with clergy and laity of the Oneonta District on April 14 at the Broad Street United Methodist Church in Norwich. With blue skies and a mild forecast for the day, Bishop Webb said the drive was beautiful, but joked that there isn’t a main road from Syracuse to Norwich. Lunch was provided by the combined efforts of several churches in the Oneonta District. During the evening session, one member shared that she has been invigorated by the cooperative spirit of the churches in the district, which was on display on April 16, when the Preston, Plymouth, North Norwich, Broad Street of Norwich, Oxford, McDonough, and Smithville Center United Methodist churches came together to host a pancake breakfast to raise funds for Africa 360.