September 7, 2022 / By Shannon Hodson / .(JavaScript must be enabled to view this email address) 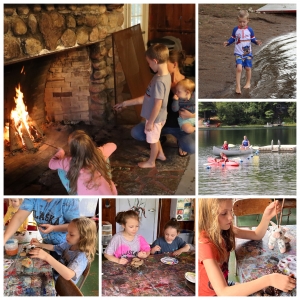 This camp was the brainchild of the Rev. Emily Huyge, pastor at First Geneva United Methodist Church. She wanted her seven-year-old son Jacob, who has an autism spectrum disorder (ASD), to be able to experience a summer Christian camp like his nine-year-old sister, Sarah, was able to experience.

Jacob had a phenomenal time at this camp. He joyfully participated in each activity: arts & crafts, swimming and waterfront activities, lawn games, and more. In the water, he loved playing a game with his mom where she would dive toward him and “get” him—his resulting laughter was contagious! Emily said, “The water and the sand is a sensory playground for Jacob.”

After playing lawn Jenga with big blocks, while the other children chose to build with the blocks, Jacob decided to organize the blocks by their numbers. Emily said, “This is ASD in a nutshell.”

Jacob had some meltdowns, but Emily as well as his father Dana, were able to help calm him each time. Jacob had some of his own calming strategies as well, such as yoga. After one instance during dinner where Jacob experienced a meltdown, he started in the savasana pose, resting on his back on the floor and then went through some standing warrior poses as well as cobra and upward dog poses on his belly. Within a few minutes, he said “Warrier 2 is my favorite pose,” with a wide smile.

This camp was a special experience for everyone. Emily enjoyed how accommodating the staff was and the way she or her family were not judged by Jacob’s meltdowns, like they are in some public settings.

Natalie said, “Everyone here is really nice. I liked making new friends, playing in the water, and being able to be myself. Also, the cabin was so cozy!”

While there was an agenda set for each day, it was altered slightly in certain situations because of the weather. For example, S’mores were made at an indoor fireplace instead of over a campfire outdoors. The kids were just as happy. Jacob follows a gluten-free diet, so he made S’mores by putting a marshmallow in between two pieces of chocolate, inventing a new dessert, which he calls “chmores.”

The schedule was also flexible, allowing people to arrive at each activity anytime the activity was offered as opposed to right at the start of each offering.

While the camp was called Autism-Friendly Family Camp, Emily said, “This camp is perfect for any child with special needs and their families. It is like a traditional family camp with the added bond between families because they can relate to each other.”

Aldersgate Site Director Ben Mudge’s four children participated in the camp, so he was able to experience the camp both as Site Director and dad.

Ben said, “Often we hear that Aldersgate is a calming place with a sense of peace about it. It is also a place where people feel they are able to be their most authentic selves! It is important to me that we continue these traditions by creating an atmosphere where everyone, children and adults alike, can experience all of the opportunities that camp has to offer. I’m thankful to Emily for bringing this concept to the Upper New York Camp & Retreat Ministries and working with us to help make such a wonderful program. I look forward to working with her in the coming years to continue curating this camping program to better meet the requirements of the special needs families within our beloved community.”