Asbury First UMC, bridging the divide one hug at a time

August 12, 2019 / By Shannon Hodson / .(JavaScript must be enabled to view this email address)

Weather is fickle in Upper New York. August 8, was a day filled with rain and thunderstorms, but the sun broke through with God’s perfect timing to welcome the Rochest 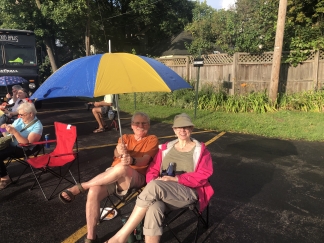 An hour before the event, The Rev. Dr. Stephen Cady, Senior Pastor at Asbury First pointed to the smeared chalk on the sidewalk, explaining, “An engineer designed the line to spell out the word, LOVE, but the rain has kept washing it away. It has been spray-chalked three times already, so we’ll have to accept the rain and have people line up without having the spray chalk lines.”

The event was advertised to start at 6 p.m. and despite pouring rain, dozens of people of all ages, ethnicities, and faith or no faith backgrounds, were lined up well over an hour beforehand, to enter the parking lot where the event was to take place. Over half the people needed to break the record had preregistered for the event

#RoctheHug was the name for this hug relay. Several sponsors were set up in the parking lot offering food and entertainment to the community.

Mark’s Pizza gave away a slice of pizza to all participants.

Fleet Feet, a local running store, organized a group run from their store (a m 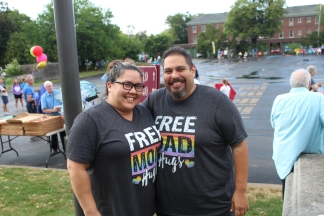 ile away) to the hug relay, and back to the store, calling it “Run, Hug, Repeat.”

By 6:15 p.m., the rain dissipated, and the sun broke through the clouds.

Lining up began by 6:30 p.m. with the aim to start the hug relay at 6:45 p.m. Several “Nice to meet yous” were heard among the hundreds of people lining up. 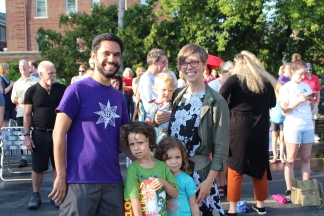 anyone who needs a hug.”

Several families were present at the hug relay. Suzie and Frankie, young parents of Milo (age 4), Anya (age 3), and Rafael (an infant in a baby carrier) were all smiles as they waited around the half-way point in line. Frankie explained, “My wife found out about this from our church (First Universalist of Rochester) newsletter and we have been meeting so many friendly, wonderful people as we have been waiting in line.”

Milo and Anya demonstrated how they have been practicing hugs as Suzie added, “Anyone who knows me knows that I love hugs, so to me, this is the perfect way to bring a community together and meet new people.”

To keep the crowd entertained, dozens of beach balls were tossed around. Jugglers made their way through the line teaching juggling techniques. Asbury volunteers started songs like “This Little Light of Mine.”

Just before 6:45 p.m., Rev. Cady made an announcement that the World Record would not be broken (there were around 650 people in attendance).

World Record or not, each person in line gave the person next to them genuine embraces. Friends were made and positivity filled the air.

Leaving the parking lot after the event, Carolyn and Fred, a couple in their 80s, who have been members of Asbury for over 20 years, look at each other, beaming with joy. Carolyn said, “That was so much fun.” Fred responded, “I love our church.” 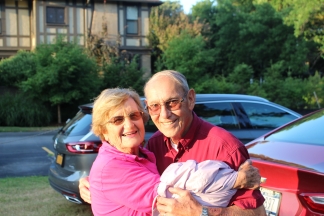 Scientific research reports that hugs can: lower blood pressure; protect against stress and infection; and can produce the happy neurotransmitter, oxytocin, as well as the mood booster, serotonin.

Research also shows that today people are hug-deprived, even by loved ones. And because of this, feelings of loneliness are often reported as well as more severe consequences like increased aggression and depression.

While a World Record was not set at Asbury First UMC, powerful hugs were exchanged, people were uplifted, and division was conquered. The Upper New York Conference’s mission of “Being God’s love to our neighbors in all places” was beautifully demonstrated.