June 4, 2014 / By UNY Communications / .(JavaScript must be enabled to view this email address)

The Rev. Craig French, pastor at the University UMC in Syracuse, presented the resolutions of the Africa 360 Task Force, the purpose of which Rev. French described as the chance to "weave together two great causes:" the Africa University Scholarship Endowment Fund and Imagine No Malaria.

"That the Upper New York Annual Conference reaffirms its commitment to raise $1 million for permanent endowed scholarships for students at Africa University and commits itself also to raising a minimum of $1 million for the denomination's Global Health Initiative,  Imagine No Malaria, in order to end the scourge of malaria in sub-Saharan Africa."

At the 2011 Annual Conference, members committed to a three-year campaign to raise the $1 million to fund eight scholarships in perpetuity at AU. Two scholarships have been funded so far. At AC 14, those scholarships were named for Bishop Marcus and Barbara Matthews and Julius and Anola Archibald, Jr.

The resolution, which extended the AU campaign and begins the commitment to Imagine No Malaria, was accepted. 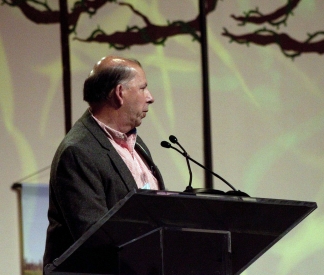 Rev. French said Upper New York is joining 32 annual conferences that are seeking to raise a total of $75 million by General Conference in 2016.

"That the bishop of the Upper New York Episcopal Area be authorized and encouraged to appoint a special task force to assess and determine the feasibility, purpose(s), goal(s), design and timing of a major, multiâ€ÂÂÂÂÂÂÂpurpose fundraising campaign (including funds for Africa University and Imagine No Malaria); further, that the task force bring a progress report and/or recommendation to the 2015 session of Annual Conference, regarding a possible Conference-wide, mission-centered capital campaign."

The Rev. Ann Kemper, pastor at Covenant UMC in Rochester, proposed amending the resolution to include other Annual Conference initiatives that support ministries in Africa.

Her intent, Rev. Kem.per said, was to expand the scope of the resolution "to present a holistic approach to affirm the many ways this Annual Conference – at the local church and Conference levels – engage in ministry with our friends in Africa."
After discussion for and against expanding the scope of the campaign even beyond ministry in Africa, Rev. French responded, saying, "This Conference has the right to expand beyond one continent; I trust the body (to make that decision).”

The amendment was not supported; the resolution passed in its original form.

Video Diary: Health team covers Sierra Leone
To see Imagine No Malaria at work, click the link below and watch a video diary of The United Methodist Church, in partnership with the Sierra Leone government, preparing for and completing its distribution of insecticide-treated bed nets. See the videos