A Reflection of UpWord! 2k17

Hundreds of youth and adults from all across Upper New York came together in Liverpool, N.Y.for UpWord! 2k17. UpWord! 2k17 was held on March 31 - April 2 at the Liverpool Holiday Inn. There were over 300 youth and adults who joined the 57Conference Council on Youth Ministries (CCYM) members who planned and organized the event. There were a total of 35 youth groups from 10 different districts in attendance. The weekend included 15 workshops on Saturday, and five workshops on Sunday. The weekend also had four worship experiences planned by the CCYM Worship Team.  Worship speakers were four young adults and former members of CCYM - JJ Warren, Krystal Cole, Marthalyn Sweet, and Jeffers 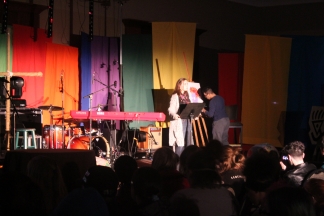 Here is a sampling of some of the workshops:

Each evening was brought to an end by eight late-night options that all youth took part in and had fun before going to their rooms for the night. The weekend was full of laughter, joy, renewal, music, prayer, spiritual growth, and fun times with other youth, due to the wonderful worship speakers, workshop leaders,and the people who led late night options each night. Click here to see some photos of Saturday’s worship, workshops, and lunch.