Reaching one young person at a time

I have always been active with urban ministry, working with United Methodist churches, their pastors, and other ecumenical clergy. The ecumenical clergy and I are concerned about the education of our young people. Together, with the city school administration, we created a Community Mentoring program, where clergy and laity become involved with the students, teachers, staff, and guidance counselors.

I was very concerned for the Steinmetz Career and Leadership Academy of the Schenectady City School. During time I spent at the school, it became evident that success can be measured differently. I felt called to recognize students who struggled in their life and overcame many circumstances to become high school graduates with the desire to continue their education by attending college.

I created a scholarship fund recognizing students who are not the top, grade-A students, but who put forth the effort to achieve a high school diploma and continue on to attend college. Two scholarships were awarded this year.

One student, Rebecca, allowed me to share her story. 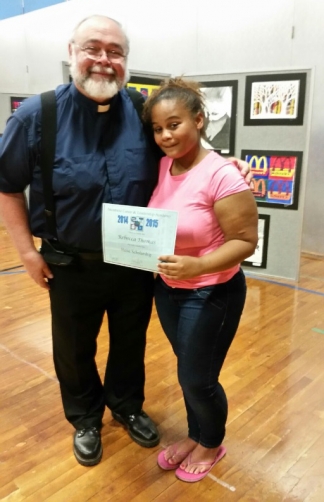 At a very young age, she was given up for adoption. Rebecca moved back home with her mother after her mother got a new boyfriend. Rebecca thought this would give her time to learn about her family, especially her four siblings.

She soon discovered her mother was an alcoholic and grew concerned that one day she would come home and her mother would be gone. For a while, she was in a “home school” to finish ninth grade, but after this experience, she decided to end her schooling. She became a Person in Need of Supervision (P.I.N.S., now called Juvenile Justice), but broke free to be on her own. She was in and out of the hospital for surgery on her knee due to an injury caused by her brother. Finally, after some recovery time, she made arrangements to stay with her aunt. If Rebecca’s aunt didn’t take custody, her mother was going to place her in foster care.

Rebecca said going back to school and graduating was her biggest accomplishment. She is now ready to attend Schenectady County Community College and is “proud of herself” for how far she has come. As she received her scholarship on May 28, she told me her motto: “Never give up, and it’s never too late to start making a difference!”

On June 4, I also gave a scholarship to Chandel, another student who has overcome obstacles. 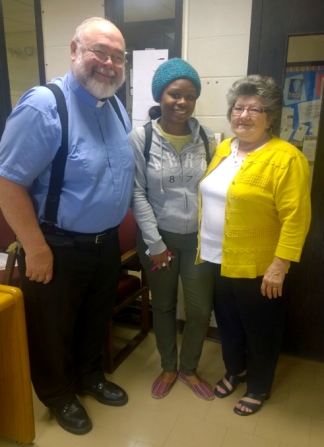 Upon entering high school, Chandel learned she was pregnant. Suddenly, she felt her hopes and dreams were “in her stomach.” She decided to continue her pregnancy. It wasn’t easy for her; people made comments, whispered, and laughed at her expense. She became the target of hurtful words.

“Learning how to forget what others have to say and getting my education really helped me for those nine months,” Chandel said.

She said that having her daughter at a very young age took a toll, but she pushed forward to complete her high school education, making her an even stronger person. Chandel’s motto is: “Now I can look up and walk and say to myself, I can do anything I put my mind to no matter how hard things get. There’s nothing wrong with a little fight because at the end, the victory is up to you.”

Chandel will attend Hudson Valley Community College, and her goal is to be a registered nurse.

I have been working with the school guidance department to verify that each student has had a successful first semester in college. I then present a check to the student’s school in January, after successful completion of the first semester.

Here in Schenectady, success is measured differently, and I am happy to be a part of recognizing individual successes, reaching one young person at a time.