Ramping it up in Cortland

Imagine not having access to your own home. Seventy-four year old Charlie Yager faced this situation in June of 2016. He struggled with lung problems for several years and was hospitalized for two weeks with severe breathing problems. Charlie came home on hospice, in a wheelchair, yet no way to enter his home. Within 24 hours, Cortland First United Methodist Church’s Ramp it Up ministry came to Charlie’s house and built him a ramp.

When Charlie came home that day last June, he was given two weeks to live. Now, over a year later, Charlie still struggles with breathing and is wheel-chair bound for the remainder of his life, but feels 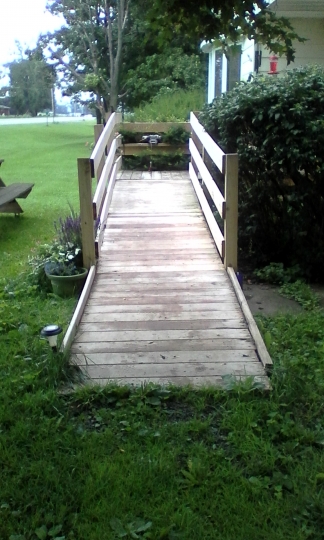 well most days. Janet Zimerman, his daughter, said, “The Ramp it up 5K is a God-send and the fact that the ramp ministry was able to build a ramp in an emergency situation amazes me. I’m pretty sure were it not for the ramp, my father wouldn’t be alive today. He is a mover and needs to be out and about. He’s a very social person.”

The Ramp it Up 5K that Janet mentioned is the primary fundraiser for Cortland First UMC’s ramp ministry. This year marked the fourth year of the race; it was held on July 15. The race registration cost was $20 and included a t-shirt and sweat towel as well as a pancake breakfast after the race for each participant, which was made possible by 48 local business sponsors and food donations for the breakfast. There were also generous prizes given for the overall winner of each gender as well as the top 3 runners in the age groups 18 and under, 19-30, and 31+, including tablets for the overall winners.

This year, there were almost 70 runners. The day began with a one-mile kids run, which was on an out-and back course.

Runners came from as far as Albany and Rochester. Melissa Weiner, the fastest female, who ran the race in 20:12, came from Ithaca, NY. She said, “I always like to run races that have a good cause. I saw a flyer for this in Ithaca and decided to sign up.”

Twenty-seven year old Emilie Searle is disabled and participated in the race in her wheelchair for the third year in a row. In the near future, she will directly benefit from the race as Ramp it Up builds a ramp for her home. Emilie said, “Ramps are so expensive. This event is an amazing ministry and obviously important to someone like me. I’m so grateful that I will be able to have a ramp installed at my house.”

Funds gained from the Ramp it Up 5K pay for all of the building materials for ramps and the ramps are installed by volunteers. Each year, five to nine ramps are mounted throughout New York State. Ramps are even built for individuals who need them temporarily after surgery, and then they are moved for someone who needs one permanently.

Rev. Charles Smith II, the pastor of Cortland First UMC, said, “What is most wonderful about this event is that we get to connect with the community in two ways…one is by having the actual event and seeing all the people have a lot of fun and the other is in the mission work of building the ramps, which is made possible by the proceeds of the race.”

Race organizers Tammy Hoover and her daughter Erica Eaton are proud of how well their hard work pays off. Tammy said, “We are blessed with an awesome ministry” and Erica, who timed the kids coming in from their 1-mile race, said, “There are so many smiles, which makes the event so fun.”

Because of the Ramp it up 5K, many individuals in need are able to access their very own homes with ease. And like Charlie, they are able to get out and enjoy the company of others. This is just one way that Cortland First UMC is living our common vision to be God’s love for all people in all places.