Keeping it beautiful with Rolling Nation

January 13, 2022 / By Shannon Hodson / .(JavaScript must be enabled to view this email address)

The challenge of cerebral palsy has never prevented the Rev. Chris Wylie from pursuing his dreams. His faith has helped to reveal Godsends throughout his life.

A banker for many years, in his mid-30s, he felt a call to ministry. Chris said, “All I knew is that I had to go to this place called seminary as a first step.”

The next seminary Chris called was the United Theological Seminary, which was at Houghton College. He passionately pursued his MDiv. God called on Chris at the right time. Chris was in the last class to earn their MDivs at United Theological College in Buffalo because United closed the program to allocate funds to other resources.

Becoming ordained and pastoring at many churches in the Upper New York Conference, Chris had to go on disability leave in 2016. His cerebral palsy limitations were exacerbated by a failed knee replacement surgery. 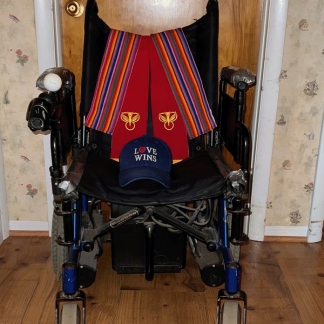 The Rev. Dave Masland, former Upper New York Director of New Faith Communities, said, “From the time I met Chris, his heart and mind were filled with a sense that God was calling him to find new ways of reaching people with the good news of God’s love, and to change the Church (or create a new church) so that it was truly a safe place of accessibility and inclusion for all people no matter the bodies in which they live. He was a gifted pastor. But his body simply would not allow him to continue the daily grind of typical full-time congregational clergy. Though his body limited his ability to work full time as a pastor, his mind and spirit continued to be alive with dreams and visions.”

Chris had to switch gears and wasn’t quite sure how until God stepped in to start paving Chris’s new direction-music.

Awaiting the doors to open (literally and figuratively) at a Sam Baker concert in November 2019, Sam approached Chris.

They started a lively conversation about their limitations (Sam lost the use of his fingers and sustained a brain injury when a terrorist group’s bomb exploded during a train ride in Manchu Picchu in 1986).

Sam and Chris started a strong friendship and stayed in contact with each other.

Chris said, “I ended up talking with Lars during a break—he was at his own merch table. He asked me what I do, and I told him I was a pastor. He said, ‘You’re a pastor? I want to know more about that. He handed me his card and asked me to call him.”

Lars also offered advice, “Write about what you know."

By February 2020, with the help of his new professional musician friends Sam and Lars and his tech-savvy wife, Jennelle Torrey, Chris begins writing lyrics and making music using Logic Pro.”

The next month, the COVID pandemic started, but that didn’t stop Chris.

Chris wrote 30 songs and Lars helped him select 10 to produce.

Rev. Masland said, “It was COVID that created the space for Chris’s love of music to come to the surface for the first time in many years. Suddenly, God seemed to be opening doorways.”

Chris hired an online voice coach from Toronto, professional singer, Jill Zadeh, who went off tour to spend time with her first child. Chris was her first online student.

Like the connections Chris made with Sam and Lars, Jill was a Godsend.

Lars began helping Chris produce his first album with the 10 selected songs ranging in genre from folk to rap, including a song entitled Rolling Nation, on which Lars performs the second verse.

Jill and her friend Duffmusiq provided musical accompaniment and sang back up. Duffmusiq also mixed and mastered the music.

While Chris was producing the album, he was also in the market for a van with wheelchair accessibility. He went to a dealership for a van—tthe van alone was thirty-six thousand dollars and to make it wheelchair-accessible, the cost was an additional fourteen thousand dollars. Chris found that many other adaptions can cost even more, sometimes as much as two times the original vehicle cost

This exorbitant expense touched Chris’s heart—and so started the Rolling Nation ministry. This is a community connection fund established to help people get wheelchair-adaptive vehicles and to offer new music at the same time.

With every contribution made to the fund, Chris is offering a copy of his new album. All proceeds go to helping people with the expense of wheelchair-adaptive vehicles.

The dealership where Chris bought his van is sending Chris referrals.

Chris said, “This dealership is going to inform their connections across the state about this fund. I hope this becomes a nation-wide initiative. I just want to keep growing this ministry and giving grants to those who need them.”

Laurel O’Connor, Associate Pastor of Faith and Action and Central United Methodist Church in Endicott, NY and founder of Affirm Fundraising, began working with Chris in the Fall of 2021 to help launch the Rolling Nation Fund.

Laurel said, “God created people to be free. Chris talks about how wheelchair-accessible vehicles help people like him to be free—that it provides amazing independence. Chris’s ministry is about allowing people to be who God created them to be.”

Laurel continued, “Chris’s dream is about bringing accessibility into the mainstream…it’s never been about him.

Chris’s album was not an end point. It is a starting point for this ministry. He is building momentum now. To produce an album from his home and to start this fund shows how the pandemic unlocked possibilities. Even when you can’t leave your home, your voice can ring throughout the universe!”

Chris hopes for this ministry to grow too. "The more we raise, the more people we help," he said.

Chris continued, “This album has been 30 years in the making. I have been wanting to do this since my 20s. God must be involved because there is no way I could have done this without all the connections God brought into my life. Dreams come true by letting go and letting God. You have to trust that love is bigger than all the bad stuff in the world.”

All the songs on Chris’s album showcase his enthusiasm, passion, and positivity. For example, his song, Keep it Beautiful, eloquently states “Give everyone you meet something to believe in; keep it beautiful, shining real bright. Keep it beautiful; it’s gonna be alright.”

Click here to learn more about Chris’s ministry and album.

To talk to Chris about speaking and singing engagements, please email bookings@rollingnation.net or call (716) 246-1488."