January 3, 2017 / By Shannon Hodson / .(JavaScript must be enabled to view this email address) 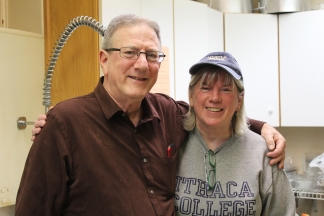 ethodist Church (SJJ) fills with dozens of diverse residents of the tri-cities of Binghamton, Johnson City, and Endicott. They range in age from infancy to elderly. And a variety of ethnic backgrounds. The director of the program since 2001, Jim Lane, said, “Everyone here is needy in one form or another. Most are low-income and literally hungry. Many have mental challenges or are struggling with addiction. There are also seniors who have no family.”

The community meal at SJJ has been offered for 25 years. Each Tuesday, a 15-minute service begins at 5:30 p.m. in the SJJ dining room. Dinner is served at 5:45 p.m. Worship includes sharing of joys and concerns with Jim Lane, Bible reference and meditation and prayer with SJJ pastor Ron Wenzinger, then Christian music throughout dinner. Worship has also included 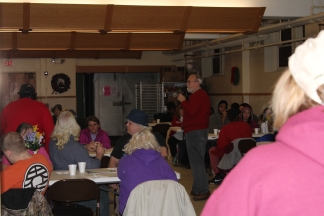 baptisms and reception of church members.

Pastor Ron said, “As this Tuesday night program has grown, it has transitioned from just a meal to a congregation. The people who come every Tuesday see themselves as that…one night, we asked each individual why they came during the service and it was so fascinating that the meal was not the top answer for anyone. The first thing on everyone’s list was prayer, fellowship, or learning about God.”

Paul Natelli is the chef. A long-time marathon competitor, he is a healthy, energetic, and vibrant 73-year-old.  Paul said, “I love doing this; one day isn’t much. It is an 11-hour day, but it is worth it and I can do it now that I am retired.” He explained that the volunteer servers come from various churches. 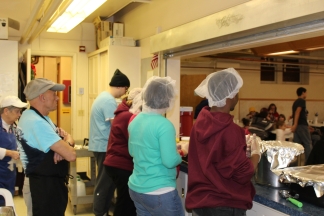 Bridge UMC; the third week, the volunteers are from SJJ; volunteers are sent from St. James Catholic Church for the fourth and fifth weeks of the month.

On Tuesday Dec. 27, there were nearly 200 people from the community at the meal.  During the joys and concerns part of worship, many expressed concerns of hospitalizations and deaths of loved ones. Several simple joys were shared, such as one middle-aged woman who exclaimed, “My Chihuahua-Maltese is going to be two on New Year’s Day!”

The room was bursting with laughter, conversation, and smiles. Many were more than happy 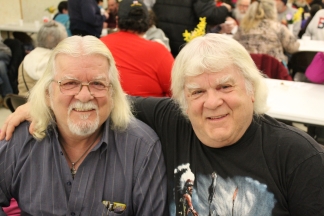 66-year old twins Jim and Norman Hough (pronounced like cough without the c) have been coming to the community meal for a number of years. They’ve been in Binghamton since 2000. Norman is four minutes older than Jim and takes care of Jim as he would do for a little brother years younger. Norman has strong faith in Jesus and believes the meal is one way that God provides for his children. Jim is uncertain and has been for years, yet he said, “The food is good…and the Lord is good,” pointing up.

Norman, who had stepped aside for seconds of the meal, came back mid-way through the conversation and whispered, “You see, Jim used to get in a lot of trouble with the law. I like to keep him with me. I am a believer and I hope that one day he becomes one too. It makes life easier.” 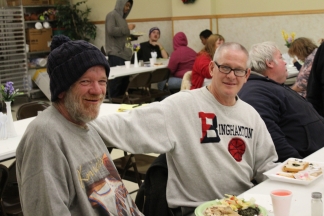 Many of the people at the SJJ meal rely on churches who serve the community as their mainstay meals.

Denis has been coming to SJJ for over 10 years. “I work until 4 and then come here when I get out of work every Tuesday. On Wednesdays, I go to a Presbyterian church that serves a community meal, and on Saturdays I go to Boulevard UMC.” Denis’s friend Louisa has been coming with him since 2001 and she also joins him at the Presbyterian church and Boulevard UMC. Denis met Charlie at the community meal years ago. “You make a lot of good friends,” Charlie said. “People can relate to one another.” 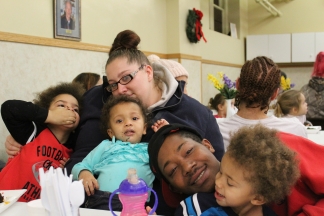 John Seals, a 28-year-old, has been coming to the community meal for the past six weeks with his girlfriend Shannon and their three children (4-year-old Jayden, 3-year old Keshawn, and 1-year-old Destiny). They learned about the meal from John’s cousin Amber.  John said, “I enjoy it so much every time I come here. Meals like this help us get to where we need to be to support our kids.”

The community meal at SJJ also serves many teens and young adults, regardless of whether or not their parents or guardians attend. Twenty-one-year old Curtis Bixter started coming with 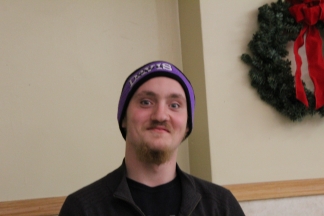 his family when he was 14; while they stopped going after a few months, Curtis continued going and hasn’t missed a week in the past couple years. Fifteen-year-old Nikkia Martinez started coming in 2012 when her 32-year old sister told her mother about it; her mother and sister went regularly until a couple of years ago and Nikkia decided to keep coming; she said, “I have a lot of friends here. The food is always good and it’s always a nice time.”

Many UNY churches reach their diverse communities by serving community meals. The community worship and meal every Tuesday night at SJJ is a beautiful example of how to physically and spiritually nourish those in need. To learn more, watch for our next issue of the Advocate, which will focus on the many ways UNY churches are embracing diversity in their congregations and their communities.