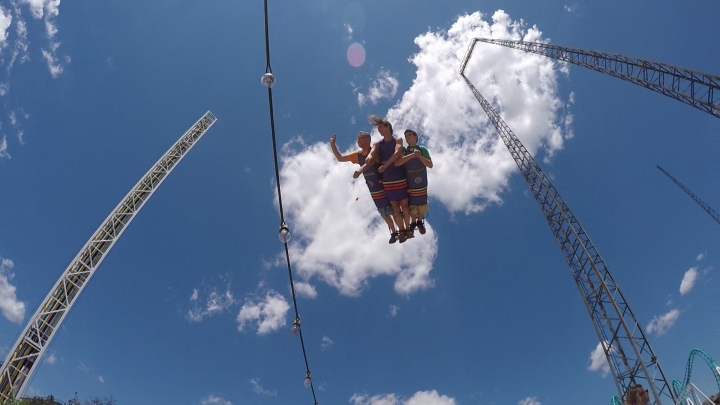 Africa 360, the initiative that the UNY Conference set forth to raise funds for Africa University and Imagine No Malaria was a huge success, raising $773,000. The ways in which districts and local churches raised these funds are awe-inspiring. Many challenges were set forth and answered for this great work.

For instance, if someone in a leadership role, perhaps a District Superintendent, told you that if you and other church members in the district raised $20,000 for Africa 360, he would bungee jump, what would you do?

Rev. Wayne said, “They shocked me. They collected well over $20,000—it was more like $24,000!” Originally, Rev. Wayne was going to commit to sky-diving, but he said too many people knew how passionately he wanted to do that, so he offered to bungee jump instead. “Then, we ran into a problem,” Rev. Wayne disclosed. “The closest bungee jump was North of Montreal.” Rev. Wayne found an alternative that was within driving distance for district church members—the Redhawk at Darien Lake, which is comparable to bungee jumping. Like bungee jumping, you are strapped to a harness and elevated to an extremely high height (in the case of the Redhawk, 180 feet); you are then asked to release a cord and you free-fall at a high speed (in the case of the Redhawk, you fly at approximately 63 miles an hour)!

On July 23, an extremely hot Saturday, Rev. Wayne, arrived at Darien Lake to meet the challenge. He signed up to fly on the Redhawk at 12noon. The Niagara Frontier District Administrative Assistant, Julie Maciejewski, said, “He chose that time because he wanted to be sure to jump before lunch.”

Rev. Wayne’s said. “My brother-in-law asked me if I was ready for my $50 ride (the cost of the Redhawk). And I said, ‘No, I’m ready for my $20,000 ride!’” And that he was. Rev. Wayne seemed quite relaxed as he waited for his assigned time to take flight. When asked if he was nervous, Rev. Wayne responded, with a chuckle, “No, I’m really not.” With him, Rev. Wayne had a crowd of over 30

district church members there to cheer him on. They held signs up with bold lettering. One sign proclaimed, “Indian Falls UMC says Soar with Christ.” Another announced, “Wayne is flying high for Africa University and Imagine No Malaria!”

The manager of the Redhawk for the day, a young college-aged student named Cooper, was happy to answer any questions about the Redhawk. He said, “Anyone who flies should feel secure knowing that they are held by two cables, each that can hold 9,000 pounds.” However, a little wrench was thrown in Rev. Wayne’s plan. Cooper and his crew would not allow Rev. Wayne to fly because the winds were 25 mph.

In order for a person to fly alone on the Redhawk, they had to either weigh at least 300 pounds or the wind had to be slower than 15 mph. Weighing far less than 300 pounds and not wanting to wait for the wind speed to drop, Rev. Wayne began his search to find a candidate to fly with him. Not one member from his district wanted to do it. Eager to see Rev. Wayne jump, I volunteered to

jump with him, but we still did not reach the 300 pound requirement; fortunately, Rev. Wayne’s 16-year old nephew, Cody, decided to join us.

We were strapped in to exceptionally heavy gear and waddled our way to the platform where we would rise. We were all sweating; it was probably a combination of nerves and the weight of the equipment on such a scorching day. The team Redhawk employees informed us of the process, “You all have to link arms and do not unlink them at any point.” We did as we were told. Then, they told us, “First, you are going to feel the floor drop; whatever you do, don’t try to grab 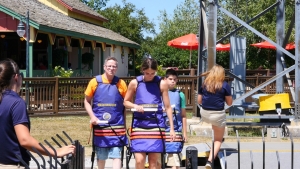 the wall when that happens. Then, we will begin to raise you. When you get to the top, we will announce that you can pull the cord and fly.” We were ready to go!

The floor dropped and of course, we all went to grab for the wall. We re-linked arms and we were off. Rev. Wayne had the honor of having the pull-cord attached to him. The trip up to the top to the Redhawk seemed to take forever. Rev. Wayne, Cody, and I talked about the turtles we could see in the pond beneath us. All the people swarming around the park looked like ants.

As we were about two-thirds of the way up, Rev. Wayne confessed, “Okay, now, I’m getting nervous.” But there was no turning back. Before we knew it, Rev. Wayne was instructed to release the cord. He did; I honestly can’t remember if we screamed or not, but it was fast! Then, at the bottom, we swung at a slower speed and Rev. Wayne unlinked his arms to wave to everyone.

Once we returned to the platform and removed our gear, Rev. Wayne walked over to his crowd of fans. Everyone was laughing and cheering. He told them that it was actually really fun. It was a great celebration and it was all for the sake of amazing ministries.

Soon, you can watch Rev. Wayne’s Redhawk flight too! The UNY Communications team caught it on video and will have it posted by July 28.  Click here to watch it.