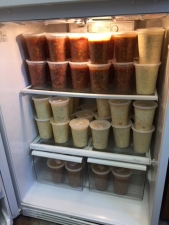 Children at the Odessa-Catharine United Methodist Church rarely had the opportunity to go to camp during the summer, so the church decided to do something about it – with the help of soup.

For the past few years, the Odessa-Catharine UMC has hosted its Soup-to-Go-Sale to raise money for the "Send our Kids to Camp Scholarship Fund,” which helps send the church’s children to summer camp at Casowasco Camp & Retreat Center.

“We’re a very small church, so we know that it’s very expensive for the children’s families to be able to afford the camp,” said the Rev. Sheila Price, pastor at the Odessa-Catharine UMC. “So, we wanted to be able to pay half the camp expenses for each child who wanted to go.” 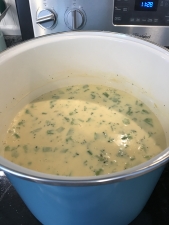 For the past two years, seven children from the church have gone to camp – up from zero – thanks to funds raised by the soup sale.

Members of congregation, parents, Rev. Price, and anybody willing to help were given the four recipes for continuity and then made the soups at home.

The church took pre-orders of the soup for $8 per quart. Those who placed orders picked them up Feb. 3. This year, more than 114 pre-orders were placed and $1,295 was raised.

Rev. Price said the church got the idea for the soup sale because they had hosted one in the past as well as because people come to their holiday bazaar each year for the church’s “famous” broccoli cheese and hamburger soups.

“I guess the reason we do this at all is we’re kind of famous for two of our soups,” she said. “We knew that it was very well-liked.”

And Rev. Price said going to camp has been a wonderful experience for the children, who come back excited, sharing what a great time they had at Casowasco Camp & Retreat Center.

“It’s not so much that we did a soup sale,” she said. “The congregation really wants their kids to go to summer camp and really wants to be able to make that possible for more of the children.”