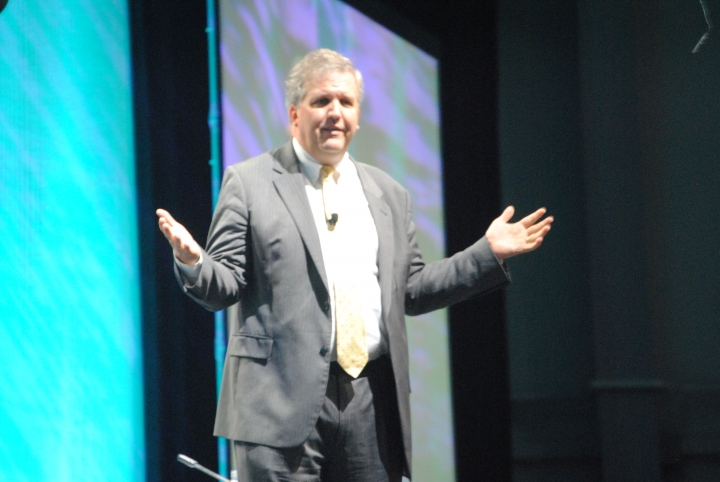 Rev. Jones explains how to get the past out of our eyes to attain an extraordinary future

For more years than most, the most hapless team in baseball was managed by Charlie Brown, said Study Leader the Rev. Dr. L. Gregory Jones of Duke Divinity School. One of the problems with his winless team involved the team’s outfielder Lucy, who was always daydreaming and thinking of boys. But one day she comes up to the mound and tells her manager, “This time it is going to be different. I’m going to pay attention and do my best.”

During the game a ball is hit to her and it comes closer and closer until it hits her on the head; the batter gets a home run. Lucy apologizes to her manger.

“I wanted it to be different, but when the ball was in the air, I thought of all the other times and I lost my confidence,” Lucy said. “I guess you could say the past got in my eyes.”

Rev. Jones said people often let the past gets in their eyes.

“When we let that take over us and begin to pour over us, it’s hard to unlearn the brokenness,” he said. “We need to pay attention to formation; we need to learn how to unlearn the sin and develop patterns of holy living.”

Rev. Jones said many think change is a matter of cognition, but Philippians 2 shows it’s not just about the mind; feelings are also involved.

The Pixar movie “Inside Out” shows the power of emotions and how they drive so much of what we do. He said many think reason is all that matters, comparing reason to an elephant, and that emotions are the rider that can occasionally get us riding in the wrong direction.

“But it’s the opposite; emotion is elephant and reason is the rider,” Rev. Jones said.

To illustrate this, he gave an example of an elephant who chased a Jeep after it almost ran over its baby, driven to act by emotion.

Developing a Christian vision, discipleship, and leaders have been woven into the fabric of United Methodists’ lives, he said, which is why Wesleyans are so eager to start schools and build on the Sunday school movement.

“If we are going to boldly move into our call, if we are really going to be able to understand the summons coming from God, we need to recognize all that needs to be unlearned so we can change.”

A dean at a medical school once told students that half of what they learned would be obsolete by the time they graduated, but he didn’t know which half, so they had to learn it all. One student said the dean undersold that message, and as a 30-year-old oncologist, she must now treat each day as a new learning experience if she wants to be faithful to her profession.

“We’re not thinking about that very well in The Church,” Rev. Jones said. “If we are going to boldly live our call, we have to be sure we are being formed and aligned with God so by the power of the Holy Spirit we see the world the way God sees it.”

“Friendship with God is manifest in prayer and manifest in befriending others because the more time you spend with friends, the more it begins to shape your imagination,” he said.

Rev. Jones shared a story where his wife, Susan, tucked their son Ben into bed for the night. Before Susan left the room, Ben kissed her four time down her face and three times across. She asked Ben if he knew that he had formed a cross, to which he replied, “that’s how I planned it.” Rev. Jones and Susan recalled Ben had received the sign of the cross in water on his forehead in a Wesley Covenant Renewal Service and in ashes during Ash Wednesday. Ben used his creativity to give an innovative twist to a common church action, which also helped shape both his mother’s and father’s imaginations.

Developing holy friendships and relationships where we challenge each other helps to execute dreams. People like Maggy Barankitse – who witnessed her village’s massacre but from the tragedy created a house of peace for children, Maison Shalom – result from this. When friendships are formed and dreams are executed, congregations dying in their old identity come together in a new pattern of ministry that brings life and vitality to the congregation, like in the church in Eastern North Carolina.

“Do we have a willingness to do the hard work and endure the costs?” Rev. Jones asked.

He said United Methodists don’t have money problems so much as they have vision and disciple problems.

“We need to be dreaming dreams that otherwise wouldn’t have been dreamed … and then we will see extraordinary things,” Rev Jones said.