Aldersgate UMC is located in Greece, a first-ring suburb of Rochester. The church is surrounded by affordable homes built in the 1950s and 60s to house employees of Eastman Kodak. In the last several years, the neighborhood has changed and has become ethnically diverse. We are pleased to see more ethnic people in our morning worships services, but God is doing much more.

A few years ago, we noticed many Hispanic/Latino people shopping in the local stores and sensed God leading us to reach out to them. We began a dialogue with Pastor Carlos Rosa-Laguer from Inglesia Metodista Unida Emmanuel, a Hispanic church in 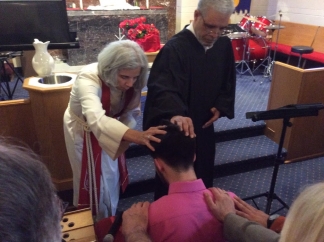 Rochester. They sent us Pastor Hector Rivera and a couple families from their church to begin a Hispanic ministry at Aldersgate. The ministry began with Bible study and after a year began a worship service in our church chapel on Sundays at 3 p.m.We planned from the beginning that this New Faith Community would be part of Aldersgate—one church with worship services in English and Spanish. In this way, we could be one church in ministry together while honoring the traditions of each.

In the five years of this ministry, we have made a conscious effort to include Hispanic members on the various church committees and work toward the same goals. We worship together several times a year and fellowship together regularly in an effort to continue to build relationships across cultures. One of the first things God led the Hispanic community to do was raise money for a church van to help expand the ministry. Little did we know at the time how important the van would become to the total ministry of Aldersgate.

About a year ago, two refugees from the Democratic Republic of the Congo stopped by the church, believing God had told them to go to the United Methodist Church, in part, because of people they knew that were attending Albany: Emmaus UMC. The father, Renzha Mujyanama Ceser, and son, Ngarultuye John Paul, shared their stories of having spent several years in a 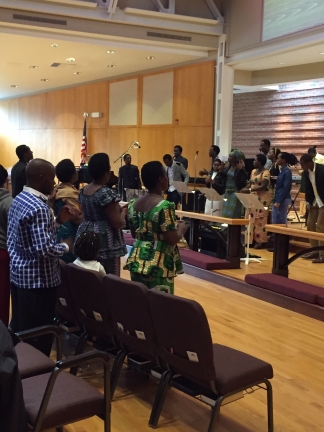 refugee camp in Uganda before being moved to Rochester. While in Uganda, they attended a Bible college and served as pastors. They had lived in Rochester about four years and were looking for a church that would welcome them and be supportive of a ministry that is important to them, The Ebenezer Hope Restoration Ministry, which serves widows and orphans in the Nakivale Refugee Camp where they had lived. Believing that it is important to pay attention to the people God sends to us, we were pleased to welcome them. We don’t know why God decided to bless us with their presence. Perhaps God sent them to us because we had been open to the Hispanics in our area. Perhaps it was because we had a van that they would need to transport other refugees to the church. Perhaps because we have prayed for more young adults in our church and God has answered us in a surprising way.

Our African brothers and sisters worshipped with us for about a year in one of the English languages services wanting to learn English and the American culture. This past September they started a service in their own language in the sanctuary at 3:00 p.m.on Sundays.

Aldersgate has been enriched by diversity, only part of which is related to our ethnic worshipers. It’s a great joy to be in relationship with all kinds of people and to learn from them. We believe God has called us to be one church made up of many people. It’s our hope and prayer that we will continue to grow and reflect God’s kingdom.