December 11, 2018 / By Shannon Hodson / .(JavaScript must be enabled to view this email address)

On Dec. 7, clergy and laity from across the Upper New York (UNY) Conference gathered togethe 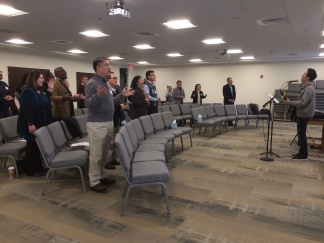 r for the UNY Korean Caucus of Prayer at the United Methodist Center in Liverpool. The event included praise and worship, led by Yohan Moon and Jee hye Song, a message shared by Moon Ho Kim, and a long period of beautiful Tongsung Kido.

Tongsung Kido is popular in Korean congregations among others—it involves everyone in the room or sanctuary praying aloud at the same time. The voices of others do not bother anybody as they are all concentrating on their own earnest prayers, longing for the empowerment of the Holy Spirit.

This Concert of Prayer was the first of ongoing Concerts of Prayer that will be held quarterly at the United Methodist Center.