CLT and DLTs gather to learn about teams

The Conference Leadership Team (CLT) gathered with the District Leadership Teams (DLTs) for their spring meeting on April 6 at the United Methodist Center.

“I don’t know what the United Methodist Church is going to look like a year or two from now,” Bishop Webb said. “It is my belief that it won’t look like it does today, and it definitely won’t look like it did before the Special Session. But, whatever it looks like, I have to believe God will be in it. I have to trust that. And, I know that whatever it looks like, we will need leaders. We will need each of you.” 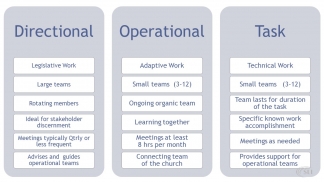 Learning continued as members of the West Virginia Conference were brought in remotely to share about their experiences working in operational teams at the District level.

DLTs then moved into small groups with two other DLTs to share about what they were accomplishing and the progress they had made on their Ministry Action Plans. DLTs had been specifically tasked with working on a plan for each church in their District to have an intentional discipleship system, and each DLT had a chance to share where they had succeeded and where they had fallen short along with any other information they cared to share.

When the DLTs and CLT gathered back together the opportunity was given to share learnings with the whole.

Finally, the CLT had the chance to share what they had been working on. They shared that they continued to embrace the Loving, Learning, Leading (L3) model. Despite great diversity in beliefs, both about human sexuality and the outcome of Special Session, the L3 model helped them to support and embrace each other following the Special Session of General Conference.

The CLT committed to continue to work together in this way to lead the Conference forward in a very challenging season and invited the DLTs to join them.

The day then concluded with prayer and sending forth.